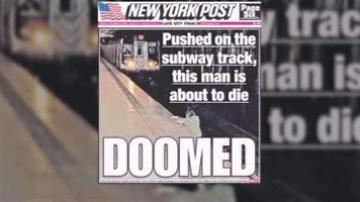 NEW YORK -- The New York Post is being criticized for running a front-page photo.

It was taken right before a man got hit by a train. Many are asking why the freelance photographer took the picture instead of trying to help the victim.

New York police said the man was pushed into the path of an oncoming train Monday. Police do have a suspect.

They said the suspect was recognized from cell phone video of the moments leading up to the incident and he has confessed.