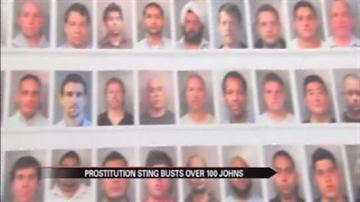 MINEOLA, N.Y. -- Over 100 men were busted in an undercover prostitution sting operation.

Among those arrested in the Long Island bust were doctors, lawyers, teachers, and even a lieutenant of the New York Fire Department.

They are all accused of trying to pay for sex with an undercover officer posing as a prostitute.

Now these men's names, mug shots and arrests have been made public to try to set an example.

"My hope is that this serves as a deterrent and dry up the desire for prostitution," said Nassau County District Attorney Kathleen Rice.

The police say they worry about the effect of making these names public to the families of the men in trouble.