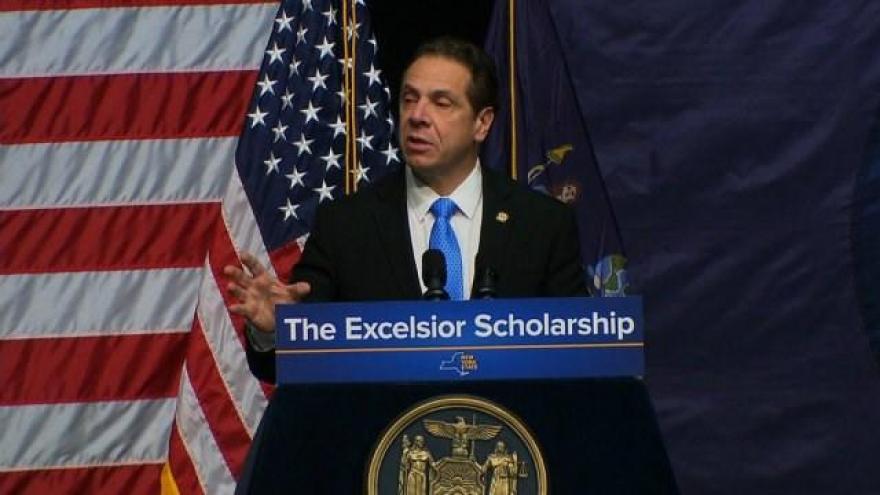 Governor Andrew Cuomo announced his plan to make in-state public colleges tuition free earlier this month alongside Bernie Sanders. But it's not something lawmakers are going to green-light easily.

On Tuesday, state legislators discussed who would be eligible, how much it would cost taxpayers, and if it a tuition-free policy is the best way to make college more affordable for New York families.

Cuomo put the proposal in this year's budget, which means it must be reviewed and voted on by the legislature before April 1.

As proposed, New York could be the first state to make tuition free at both community colleges and four-year degree programs statewide. (Rhode Island is considering a similar proposal during the state's budget negotiations, and both Tennessee and Oregon have made two-year community college programs tuiton-free.)

Students at New York's public colleges -- SUNY and CUNY schools -- would pay nothing for tuition as long as they fell below an income cap, which would be phased in over the first three years of the program. It would first apply to families who earn $100,000 this year, then to those who earn $110,000 or less next year, and eventually reaching $120,000 or less in 2019.

There's still a couple of months to hammer out the details -- and for lawmakers to decide whether or not the program, called the Excelsior Scholarship, should be in the state budget at all.

Here are some parts of the plan that drew the most concern from lawmakers on Tuesday:

As proposed, only those students who enroll in at least 15 credits a semester would be eligible. It's designed to encourage students to complete their degrees on time.

For those who do qualify for the free-tuition plan, they're still on the hook to pay for room and board, fees, books or other living expenses -- which can cost more than tuition itself.

Assemblyman Victor Pichardo suggested it might make sense to change the formula so that award money could cover some living costs for the neediest students.

How much will it cost the state?

The cost of the program is still unclear. The governor's office estimates it will start at $163 million in the first year, but some lawmakers say that's low-balling it.

"If it was that inexpensive to do, we would have done it a long time ago," Assemblyman James Skoufis told CNNMoney. He proposed a bill three years ago that would have made tuition free.

The chancellors at both the SUNY and CUNY systems testified Tuesday that they had teams crunching the numbers, but cannot yet estimate how many of their students would be eligible.

SUNY Chancellor Nancy Zimpher said that 80,000 of the system's students last year were from families who would meet the income criteria and are enrolled in 15 credit hours.

But that number does not factor in that half of SUNY students already pay nothing for tuition because they get federal Pell grants and/or the state's need-based Tuition Assistance Program (TAP) award. Those students would not get any more money under the free-tuition proposal because it's structured to cover the remaining cost to the student after accounting for other types of financial aid.

Both Zimpher and CUNY Chancellor James Milliken agreed that enrollment would increase if the tuition-free plan was enacted, but neither could estimate by how much.

Zimpher expects it to increase applications from low-income students who may have gotten significant financial aid under the current system, but weren't aware of those aid programs and didn't think college was an option for them.

"Just putting the term 'tuition-free' out there will move the dial on access," she said.

A handful of lawmakers expressed concern about jeopardizing the quality of the SUNY and CUNY systems by bringing more students in.

Both school systems are working to determine what max capacity would be. And Milliken said CUNY plans to offer more online courses in the future, which could help with an increase in enrollment.

Correction: An earlier version of this story incorrectly said students would be required to take 15 credits a year. In fact it's 15 credits per semester.