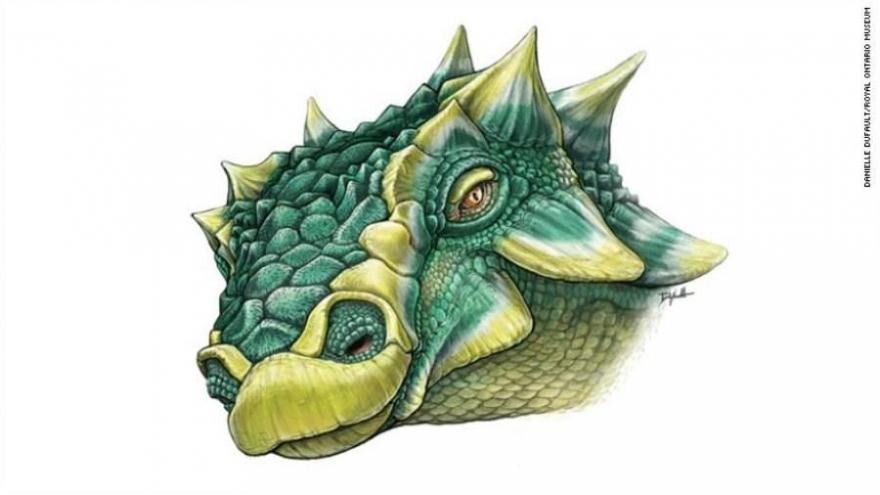 (CNN) -- When you find a dinosaur resembling a "Ghostbusters" monster, who you gonna call?

A newly-discovered species of dinosaur has been named after one of the monsters in "Ghostbusters," Zuul, according to the Royal Ontario Museum in Canada.

For those that need a refresher, Zuul is the giant dog-like creature that possesses Sigourney Weaver's character (the one she sees in the refrigerator).

The Zuul crurivastator (which translates to "destroyer of shins") lived about 75 million years ago. It's a newly-discovered species of ankylosaurid, an armored dinosaur, and has a 10 foot-long tail (3 meters) with armor running down it, according to the museum. The dinosaur was likely an herbivore, weighing about 5,500 pounds (2,500 kilograms).

"I had really wanted to use that for a long time and I was saving it for a specimen with a really well preserved tail," Dr. Victoria Arbour, an expert on armored dinosaurs and lead author of the study announcing the finding, told the Atlantic. "I wasn't going to get a better choice than with this fellow."

It was found in the US state of Montana.

"The spikes running all the way down Zuul's tail were a fantastic surprise to me -- like nothing I've ever seen in a North American ankylosaur," Arbour said in a news release. "It was the size and shape of the tail club and tail spikes, combined with the shape of the horns and ornaments on the skull, that confirmed this skeleton was a new species of ankylosaur."

The findings were published in the journal Royal Society Open Science.