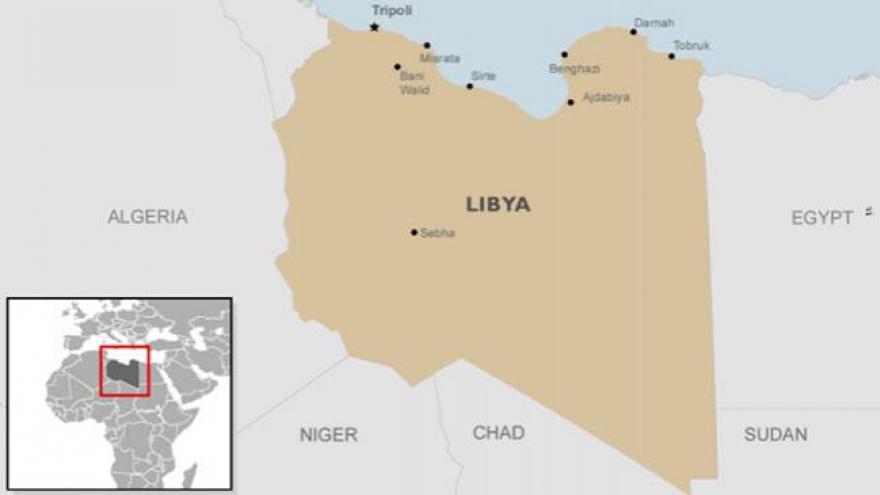 (CNN) -- A US jury found Ahmed Abu Khatallah guilty on four of 18 charges on Tuesday related to his role in the 2012 terrorist attack on a US diplomatic compound in Benghazi, Libya, that killed US Ambassador Christopher Stevens and three other Americans.

A federal jury came back with a guilty verdict for the following counts:

Conspiracy to provide material support and resources to terrorists.

Using, carrying and discharging a semi-automatic assault rifle during a crime of violence.

Maliciously destroying and injuring dwellings and property, and placing lives in jeopardy within the special maritime and territorial jurisdiction of the United States, and attempting to do the same.

The jury found Abu Khatallah not guilty on the four murder charges of the US personnel killed in the September 2012 attack on the US office in Benghazi.

Abu Khatallah, wearing a white shirt untucked with his sleeves rolled up and a white beard, stood and faced the jury emotionless as the verdicts were read.

He faces at least 10 years up to life in prison for his conviction on the four charges according to the Department of Justice.

While it convicted Abu Khatallah on two terrorism material-support charges, the jury returned a special finding that his actions did not result in death, which would have carried life sentences. Instead the counts carry possible sentences of up to 15 years each.

Additionally, he faces up to 20 years for his actions at the US mission of maliciously destroying and injuring dwellings and property, and placing lives in jeopardy. The verdict on the final count -- using and carrying a semiautomatic weapon during a crime of violence -- carries a mandatory 10-year minimum sentence.

In 2016, the Justice Department announced it would not pursue the death penalty against Abu Khatallah -- opting instead for a maximum sentence of life in prison.

Tuesday's verdict was handed down after eight weeks of testimony at a US District Court in Washington, during which prosecutors argued that Abu Khatallah was a "stone-cold terrorist" who was driven by a desire to kill Americans.

"Ladies and gentlemen, he hates America, and that's why he committed this attack," federal prosecutor Michael DiLorenzo told the jury in his closing argument.

Abu Khatallah was not accused of directly taking part in the attack on the US mission and CIA annex but prosecutors described him as the "on-scene commander" who orchestrated the deadly assault.

He "didn't light the fires or fire the mortars, but is just as guilty" for planning the attack, setting it in motion and getting others "to do his dirty work," federal prosecutor John Crabb told jurors in his opening statement.

The defense pushed back on those claims, arguing the prosecution was attempting to cover holes in the evidence by playing to the jury's emotions.

"They want you to hate him," attorney Michelle Peterson told the jury, adding there is "no evidence" that Abu Khatallah hates America.

The defense team consistently attacked the credibility of three Libyan witnesses who took the stand for the prosecution during the trial.

"All three government witnesses had an ax to grind," Peterson said during her closing argument.

Peterson also said one key government witness -- who testified under pseudonym Ali Majrisi -- was motivated to lie after receiving $7 million to take the stand.

The prosecution said Ali Majrisi assisted in Abu Khatallah's capture in June 2014, when intelligence assets lured him to a beach-side villa near Benghazi.

The attack and political firestorm

Years of court proceedings have revealed new details related to the deadly 2012 attack, during which assailants armed with automatic weapons and rocket-propelled grenades blasted through the main diplomatic mission before setting it ablaze, according to court papers.

Coming in the midst of a US presidential campaign, the Benghazi assault ignited a political firestorm -- the effects of which still linger.

Republican critics of Democratic former President Barack Obama and then-Secretary of State Hillary Clinton seized on the vulnerability of the US compound on the anniversary of the 9/11 attacks to accuse the administration of failing to provide proper security.

GOP members of Congress scrutinized how Clinton handled the matter ahead of her failed 2016 presidential bid. She oversaw US diplomacy at the time as secretary of state, resulting in questions about her responses and decisionmaking in addition to grilling by lawmakers during testimony on Capitol Hill.

For years, Abu Khatallah was the only Benghazi suspect in US custody but that recently changed when President Donald Trump announced the capture of a second individual: Mustafa al Imam.

Al Imam was charged with three felony offenses, two of which carry maximum sentences of life imprisonment, and he made his first appearance in a US District ourt in Washington this month.

Who is Ahmed Abu Khatallah?

Abu Khatallah emerged from years in prison under the regime of former Libyan leader Moammar Gadhafi to form an Islamist militia and later became associated with Ansar al-Sharia, a group US officials blamed for the 2012 attack.

Believed to be in his 40s, Abu Khatallah became the face of the militant attack and a top target for the US after he cultivated a celebrity profile in its wake, meeting with journalists and granting interviews.

Prosecutors highlighted testimony and video evidence that they said proved Abu Khatallah not only had orchestrated efforts to gather weapons ahead of the attack but also had rushed the gates of the mission armed with an AK-47 rifle and fuel canisters, which were used to set the building on fire.

The prosecution stated in its opening and closing arguments that Abu Khatallah had been motivated by his hate for Americans and concerns that the US mission in Libya served as a "spy nest."

"The defendant's participation in the attack was motivated by his extremist ideology," prosecutors said in 2014 court documents, which also alleged that Abu Khatallah "voiced concern and opposition to the presence of an American facility in Benghazi" days prior to the attack.

However, the defense argued that Abu Khatallah was not a radical terrorist but rather a "Libyan patriot" who fought to free the country from Gadhafi.

The defense said Abu Khatallah was at a friend's house when he heard about the attack and "went to see what was going on."

He did not attempt to block people from going to the attack site but was only trying to protect those present from gunfire, the defense said during opening statements, adding that Abu Khatallah never went to the CIA annex and was at home when the mortars hit.

"I knew we were under attack"

Some of the most compelling testimony of the trial came from special agent Scott Wickland, a regional officer with diplomatic security who was living at the mission.

Wickland recalled the events of September 11, 2012, as the first witness to testify in the trial and was visibly emotional as he described Stevens as "very personable" with a warm manner that was "not normal" for an ambassador.

Around 9:45 p.m. on September 11, Wickland said, he heard chanting down the street from the mission and then calls of "Allahu Akbar."

As guards scrambled to put on their protective gear and get their guns, Wickland said, he went to notify Stevens -- who had already gone to bed -- of a possibly escalating security situation.

Wickland then said he had directed Stevens and IT official Smith to a safe room in one of the compound's villas.

There were gunfire, explosions and "bloodcurdling screams" on the radio, according to Wickland, who told the jury, "I knew we were under attack."

The doors of the villa were then blown open, and attackers entered the compound armed with AK-47s and other assault rifles, he said.

When the attackers could not blast open the gates of the safe room, they set the villa on fire, Wickland said.

With smoke filling the safe room, Wickland told the jury, he tried to lead Stevens and Smith to the bathroom so they could get some air but quickly realized they were not behind him.

He tried to feel around and yell for them but couldn't find them, though he kept searching until he was out of air and almost collapsed.

As Wickland went outside to escape the smoke, he said, he was fired upon by grenades.

He repeatedly entered the compound to search for Stevens and Smith until he was out of breath, only to be met with a barrage of grenade fire each time he exited the compound.

Unable to locate Stevens and Smith, Wickland told the jury, he said to himself, "I'm going to search for them until I'm going to die."

Wickland then said he waited for a lull in the gunfire and climbed a ladder to the roof, where he stayed alone for a very long time and continued to take fire -- unable to make contact with anyone on the radio.

Just when he thought everyone was dead, one of the special agents, David Ubben, called Wickland on the radio and said, "Are you alive?"

Correction: This article has been updated to reflect the final charges on which Abu Ahmed Khatallah was found guilty and his possible maximum sentence.