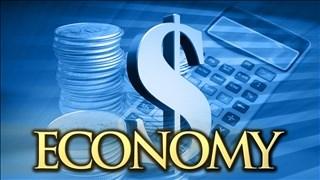 The U.S. economy only grew 0.5% in the first quarter of the year. Tepid consumer spending, global headwinds, a struggling manufacturing sector and weak business investment all weighed down growth.

It's the lowest print in two years for U.S. GDP, or gross domestic product, the broadest measure of economic activity.

"The economy is hanging by a thread here...there's really no growth," says Stephen Kalayjian, chief market strategist at KnowVera, a market research firm.

Growth was even lower than economists' anemic expectations of 0.7%. It follows the very slow pace of growth of 1.4% in the last three months of last year.

The first quarter figure is a far cry from the expectations that economists had started the year with. At one point in February, the Atlanta Federal Reserve projected that economy would grow 2.5% annually between January and March.

At the time, the first reports of retail sales in January were strong. But they were revised down significantly and retail sales in February and March were lackluster too. Consumer spending makes up the majority of economic activity in the U.S.

Experts say the low growth start to the year positions America for another year of ho-hum economic progress.

"It appears that GDP growth is on course for another underwhelming gain of around 2% this year," says Paul Ashworth, chief economist at Capital Economics, a research firm.

Americans are feeling a little less confident about opening up their wallets. The savings rate increased to 5.2% in the first quarter from 5% at the end of last year. That's higher than the pre-recession levels and a sign that Americans are still cautious spenders since the recession ended in June 2009.

Another major headwind was business investment. It was down slightly in the quarter mainly because energy firms cut back spending as oil prices dove to $26 a barrel earlier in the quarter.

On the good side, economists expect growth to pick up later this year. First quarter growth has been a dud the last few years, only to see growth pick up for the rest of the year.

And inflation showed signs of life. Personal consumption expenditures, excluding volatile categories like food and energy prices, rose to 2.1% in the first quarter from 1.3% at the end of last year.

The Federal Reserve cares a lot about PCE and inflation, which has been nearly non-existent during the economic recovery post-recession. Rising inflation means the Fed may be able to justify increasing rates later this year.

The Fed acknowledged that the economy has slowed. It didn't raise interest rates Wednesday, citing low growth and that household spending had "moderated."