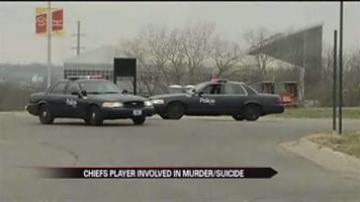 KANSAS CITY -- A Kansas City Chiefs player was involved in a murder-suicide on Saturday.

Police said linebacker Jovan Belcher shot his girlfriend multiple times before driving to practice where he shot and killed himself.

When police arrived on the scene they saw a man in a car with a gun to his head.

Police also said that Belcher talked to the coaches in the parking lot outside the practice facility.

Belcher was in fourth year with the Chiefs.

The Chiefs are scheduled to play the Carolina Panthers tomorrow in Kansas City.

The team has announced that the game will go forward as planned.