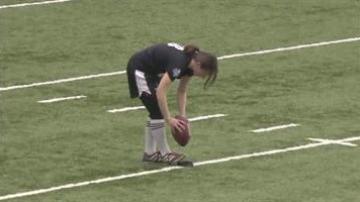 NEW JERSEY — A woman tried to make history trying out for an NFL team at a regional combine. But now that that tryout is raising questions after she could barely kick the ball.

Lauren Silberman had hopes of getting a shot at trying for an NFL team.

There were scouts at the Jets training camp and Silberman was hoping to kick the ball far. But it only went about 20 feet. The 28-year-old is a MIT graduate and has only played in club soccer in college.

The NFL said they do not pre-screen as long as they are draft eligible and can pay the $250 entrance fee.