NH man attacked by deer after shooting it 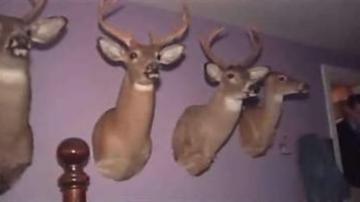 Everett Gray said after he shot an 8-point buck, the animal would not go down without a fight. When Gray went to inspect his kill, he realized the deer wasn't dead.

He said the deer used its antlers to push into his side boring a 4-inch hole into Gray's body.

"Picked me up off the ground and just slammed me back on the ground," said Everett Gray. "It's just pounding into me. It's trying to wrench his head back and forth and pushing with his hind legs."

The antlers did not hit any organs and he is expected to be alright.

As for the deer, Gray is adding the animal to his collection, but said it will be his last. He's retiring from deer hunting.