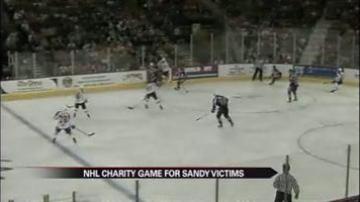 There haven't been any NHL games played this year but that didn't stop some of the pros from getting back on the ice.

It was called "Operation Hat Trick" and it was Team New York versus Team New Jersey. Tickets ranged from $20-$100.

The proceeds will go to the Red Cross, the Empire State Relief Fund, and the New Jersey Hurricane Relief Fund.