Nikki Haley on Iran: 'We must not be silent' 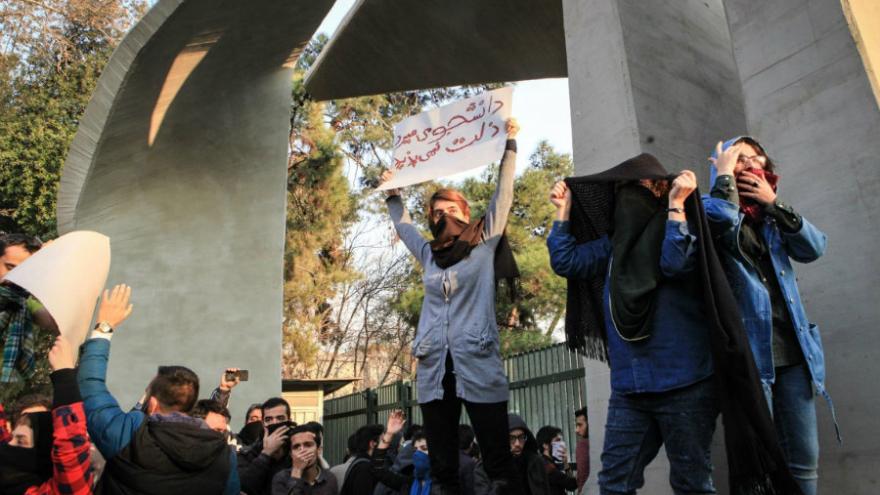 (CNN) -- US Ambassador to the United Nations Nikki Haley praised Iranian protesters Tuesday, adding that the US is seeking emergency meetings with the Security Council in New York and the Human Rights Council in Geneva regarding Iran.

"The people of Iran are crying out for freedom," Haley said. "All freedom-loving people must stand with their cause."

"This is the precise picture of a long oppressed people rising up against their dictators. The international community has a role to play on this. The freedoms that are enshrined in the United Nations charter are under attack in Iran," she said. "If the Iranian dictatorships history is any guide, we can expect more outrageous abuses in the days to come. The UN must speak out."

She continued: "We must not be silent. The people are crying out for freedom. All freedom loving people must stand with their cause. The international community made the mistake of failing to do that in 2009. We must not make that mistake again."

Her remarks reflect a broader, concerted effort by the administration to encourage the large-scale demonstrations, which have swept the country since Thursday. Earlier Tuesday, Undersecretary of State Steve Goldstein said the United States wants to encourage protestors in Iran to "continue to fight for what's right and to open up Iran."

"Right now we're going to have conversations with the Security Council and see what we need to do to have an emergency session," Haley added about Iran. "One way or another, we will have a meeting on what is happening in Iran and their protests and their fight for freedom."

The demonstrations in Iran, which have erupted against a backdrop of rising food and gasoline prices, began Thursday in the northeastern city of Mashhad before spreading to other cities. At least 21 people have died as a result of the protests.

When asked about Iran's missile program, Haley said the US has no unilateral plans "at this time" for tackling the issue.

Iran's missile program is not in breach of its nuclear deal and will continue despite objections from the United States, President Hassan Rouhani has said.

US communicating with protesters

State-run media outlet IRIB reported that Iranian officials had temporarily restricted access to social media apps Instagram and Telegram, which have been used by Iranians to share news about the protests.

The State Department has been communicating with protesters through their Farsi-language social media accounts, posting statements of support from US and world leaders, despite the Iranian government's decision to block access to some websites.

"We are still communicating with people in Iran on Facebook and Twitter and we're constantly updating those two sites in Farsi," said Goldstein. "And the people in Iran are able to get into those sites through VPN (virtual private networks)."

Goldstein said that social media sites are "legitimate avenues of communication" and "people in Iran and throughout should have access to those sites."

He further encouraged American tech companies, such as Twitter and Facebook, to keep their platforms available to users in Iran, saying, "the more available these sites are, the better it is, and tech companies should work towards that end because we share the same goal of open communications."

Goldstein's and Haley's remarks follow a series of tweets by President Donald Trump over the holiday weekend in which he praised the protesters, blasted the Iranian government and criticized his predecessor, Barack Obama, for failing to actively support the last major protests in Iran.

Indeed, the Trump administration's response to the recent protests has been in stark contrast to the Obama administration's approach in 2009, when Iranians took to the streets to decry disputed election results.

Obama was initially reluctant to speak forcefully in favor of the demonstrations for fear the Iranian regime would undermine the grass-roots nature of the protests. But Obama's critics say his hesitancy only emboldened the Iranian regime.

"I think the response so far from the US has been a good response," Michael Singh, a former Bush administration official who is now a senior fellow at the Washington Institute for Near East Policy told CNN's Wolf Blitzer Tuesday, assessing the Trump administration's approach. "I don't think we should be silent."

"But it's not enough that we speak out," he added. "We need to also organize an international response."

Diplomats tell CNN the Trump administration was in touch with European allies over the weekend to coordinate strategies, but efforts to put out a joint statement were met with reluctance from some governments.

Still, a senior administration official said US officials are taking inventory of ways they can be supportive of the demonstrations and come up with "creative" ideas.