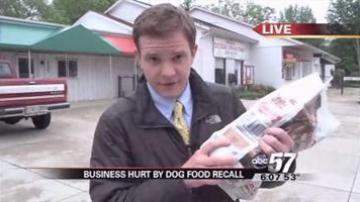 NILES, Mich. - A well known Niles pet food business is in danger of closing because the food it’s been selling has been recalled for salmonella.

Last week the Center for Disease Control and U.S. Food and Drug Administration announced an investigation into Diamond Pet Foods. The agencies say people are getting sick from handling pet food and a recall has been ordered.

For the past three days Maggie Patterson hasn’t been able to sleep or eat. “All I could do is think about the people I could call and say ‘don’t feed your dog the food I sold them,’” she said. “It’s going to kill (your dog) or make you sick.”

Patterson owns Doggie-Drive-Thru, a pet food business in Niles. She said all the food sold in her store for the past six months is included in the recall.

According to the CDC, 14 people have been diagnosed with salmonella from touching Diamond Pet Food. Five visited the hospital.

“I consider it terrorism,” said Patterson. In 2005, Diamond had a recall for mold in pet food that killed several dogs.

Patterson said she doesn’t have money to refund her customers and plans to file a lawsuit against Diamond Pet Foods.

Patterson will keep her pet day-care business open but it will be difficult. “I may never turn the open sign on again,” she said. “This might be the end of Doggie-Drive-Thru after 23 years but I certainly am not going to sell anything dangerous and right now that’s all I can get my hands on.”

To figure out of your pet food is included in the recall click here.