Niles residents picking up the pieces after EF-1 tornado 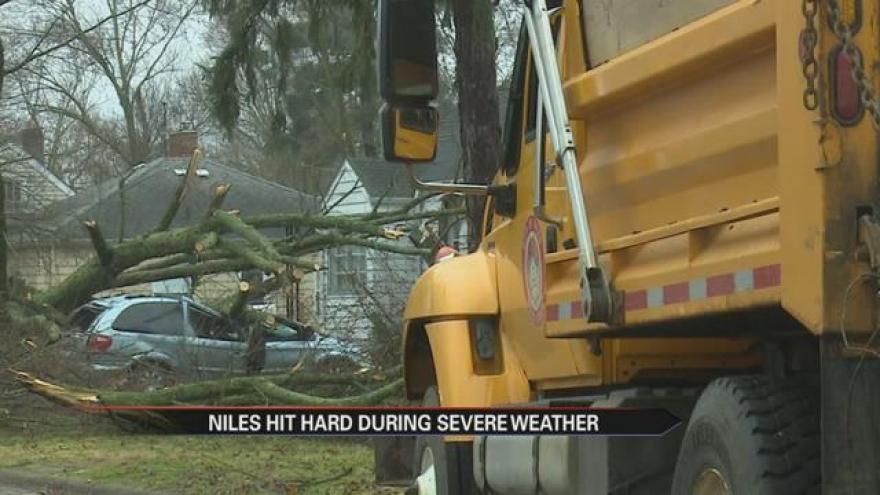 “Hell” is how one Niles man described experiencing an EF-1 tornado Tuesday night.

“The strongest wind I’ve ever heard or felt in my life,” said Steve Bowerman, a resident in Niles.

“It was loud, it was wet and windy, and now we have a mess!” said Kelly Griffin, another resident.

“Thunderstorms! We’re used to that,” said David Jenkins, whose home was damaged. “We deal with thunderstorms. This was not a thunderstorm.”

There was a universal buzz of chainsaws, wood chippers and leaf blowers at work in Niles on Wednesday as cleanup commenced.

Wednesday evening -- after the above video aired -- the National Weather Service confirmed an EF-1 tornado had touched down in Niles just before 9 p.m. Tuesday.

The peak winds reached 105 mph, targeting a 4 to 6 block radius along Howard Street and in between Thirteenth and Seventeenth streets.

“Three or four block area here, north and south, east and west, this morning, it kind of looked like a warzone,” said Bowerman.

There were cars crushed by trees, power lines pulled down or literally snapped in half, and homes like Jenkins’ that were left in ruins as fierce winds picked up Tuesday night.

“The deafening roars started,” said Jenkins. “Like, just the loudest roar I’ve ever heard in my life.”

His attached garage is gone.

His screen door ended up stuck in one tree that was left standing.

But Jenkins said the scariest part was when his front windows imploded.

Dozens of trees were either broken apart or completely uprooted throughout Niles on Wednesday.

Power outages and damage forced some to leave their homes.

But for many, the cleanup continued as they tried to process what happened.

“In the 30 years I’ve lived here, I’ve never had one happen in town,” said Jenkins.

As of Wednesday afternoon, about 500 customers in Niles were still without power, according to Mayor Nick Shelton.

Shelton said all power should be restored within the next two to three days, due to the severity of some of the damage.

If you and your family need a safe place to stay, the Michigan State Police Post in Niles – at 1600 Silverbrook Avenue – is acting as an emergency shelter.