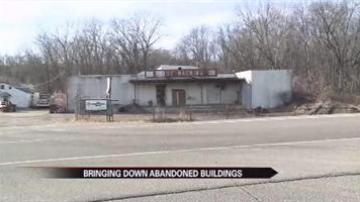 BERRIEN COUNTY, Mich. -- Niles Township may be losing a few eyesores. It is working with Berrien County to obtain $1 million in grant money that would go towards demolishing a few dilapidated buildings.

It’s part of the statewide blight elimination program in Michigan. Currently the state is trying to decide how to distribute $15 million for cleanup.

Andy Cronin lives next door to a condemned structure.

"I've been looking at this building for 8 years, soon to be 9 in February. It'd be nice to see the building come down,” said Cronin.

He says in addition to its obvious lack of curb appeal, the building just isn't safe.

"It's slowly falling apart behind it. Its foundation is starting to crumble as well as its upper floors aren't even safe to walk in. If a child were to get in they would probably fall through,” said Cronin.

"It's a mixed use two story structure that's been vacant for at least a decade and it's in quite a bad state of disrepair,” said Jeff Dunlap of Niles Charter Township Code Enforcement.

That's not the only building on the township’s demolition list.

The old Szucs Cement and Asphalt recycling facility is also vacant and has an entire book of code violations and fines.

"We've had complaints for years on that site with the dust coming into the city. It's right by the courthouse,” said Dunlap.

The township is hoping the state of Michigan will help them out with a $1 million grant to clean up the old commercial properties.

"We don't qualify for a lot of the grants, the federal grants, so that's why Berrien County said we want to do something on the commercial side of it,” said Dunlap.

For neighbors like Cronin, the demolition would be welcome.

The due date for the county's grant is December 12. The county expects to hear back from the state about whether they were awarded the money in mid February.