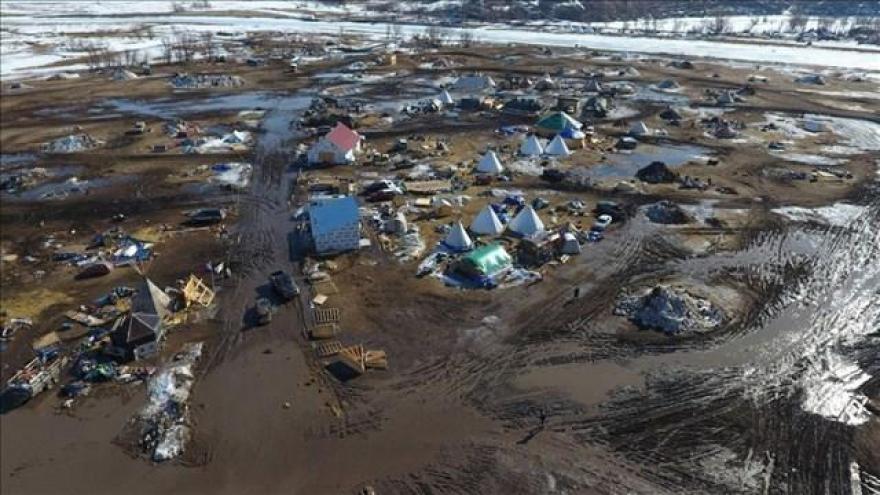 CANNONBALL, North Dakota (CNN) -- A handful of people were arrested Wednesday at a protest site near the Dakota Access Pipeline after a deadline to leave the camp expired. Authorities have also closed the camp.

Lt. Tom Iverson of the North Dakota Highway Patrol said nine people were arrested at the Oceti Sakowin camp after the 2 p.m. deadline set by Gov. Doug Burgum. The nine people had refused commands to leave the area, Iverson said.

"We knew this day was going to come," Iverson said, referring to the state deadline to close the camp for environmental and safety reasons.

Iverson said authorities had given a group of protesters who agreed to be arrested an additional two hours but that group did not materialize.

He said law enforcement were confronted by "agitators" who approached the law enforcement line "provoking them." He said authorities were patient and gave people multiple warnings to back up and leave the roadway outside the camp entrance. Some people backed off, he said.

"This camp is closed," Iverson said, adding that no vehicles will be allowed into the camp.

Iverson said about 50 to 75 protesters remained in the camp. It is unclear how and when those protesters will be removed.

"With darkness coming, we're not going to be entering that camp right now," Iverson said. "It's not a safe situation with people potentially hunkered down in the camps."

Last week, Burgum signed the emergency evacuation order of the property to allow private contractors to remove waste from the Oceti Sakowin camp area, which officials say is in a flood plain. The order said warm temperatures have accelerated snowmelt and increased the risk of flooding, and that those in the flood plain are at risk of personal danger.

Burgum's order comes as the project moves closer to completion after the US Army Corps of Engineers recently granted an easement for the last stretch of the 1,172-mile pipeline bitterly opposed by Native Americans and environmentalists.

About 100 people voluntarily marched out of the protest camp near Cannon Ball ahead of Wednesday's deadline. The protesters chanted, waved flags and played drums as they left.

A handful of tents were set ablaze Wednesday morning. Tribal member Kaooplus Enimkla Thunder and Lightning said some of the tents were frozen into the ground and had to be burned to be removed.

The few protesters who had refused to budge said Tuesday they didn't believe the fight was over.

"I'm not going anywhere. I carry a knife with me all the time. But I am handing that over so that I have no weapons on me. I will stay and pray, even if they come to remove us," Valerie Armstrong, 36, of Sherman, Texas, said Tuesday.

Instead of leaving, Armstrong was busy building a tiny wooden house.

Oceti Sakowin was the main camp closest to where the pipeline will go underneath the Missouri River. At the peak of protests, the camp's population climbed to as many as 10,000 people. A couple of hundred remained Tuesday as heavy equipment hauled away materials. Some campers also helped clean up.

North Dakota officials, including the North Dakota Department of Health, had partnered to bus protesters to a travel assistance center, where they would be able to receive water and snacks, health assessments, a hotel lodging for a night and bus fare home.

On Tuesday, Morton County Sheriff's Office spokeswoman Maxine Herr said: "Women, children, elderly and any other protesters that want to take the opportunity to leave the camp can do so at that time."

She added: "We are seeking to take the moral high ground and help them gracefully exit."

The Standing Rock Sioux tribe has said many times that the fight belongs in the court system and repeatedly has asked protesters to leave for safety and environmental reasons.

'Keeping out all the evil'

Some protesters on Tuesday seemed to be bracing for the worst.

Dean Dedman, a member of the Dene Nation, had both hands wrapped around a post hole digger trying to gouge out a hole in the frozen ground. Several other young men joined him, digging holes in a line across the tallest hill inside the Oceti Sakowin camp.

"We are building our fortress of solitude," Dedman said.

He said the barrier they were building was to keep out sheriff's deputies as well as the Bureau of Indian Affairs.

The $3.7 billion pipeline is slated to stretch through four states -- from North Dakota into South Dakota, winding through Iowa and ending in southern Illinois. It is expected to move 470,000 barrels of crude oil a day across the Midwest. The project is completed except for the contested portion under North Dakota's Lake Oahe, half a mile upstream from the Standing Rock Sioux tribe's reservation.

Tribe members are concerned the once-stalled project would affect their drinking water supply and place downstream communities at risk of contamination from potential oil spills.

Soon after, the corps granted the easement. The move was enthusiastically greeted two weeks ago by Energy Transfer Partners, the pipeline's developer. The company has said it's ready to proceed.

But the Standing Rock Sioux Tribe and its allies claimed then that the easement shouldn't have been granted without the issuance of an expected environmental impact statement.

The tribe said it plans to argue that the impact statement process was wrongfully terminated.

Burgum's order to evacuate isn't the first mandate to leave the camp.

Last fall, protesters also vowed to stand their ground despite growing calls for them to leave. Then-Gov. Jack Dalrymple ordered them to clear out immediately, citing the harsh winter conditions.

At the time, the Army Corps of Engineers also said activists who refused to leave could face arrest. Officials later backtracked, saying they had no plans to remove forcibly those who stayed.

Earlier this month, the corps also ordered people to leave to prevent injuries and significant environmental damage in the event of flooding.

The North Dakota National Guard said $8.7 million had been spent since August on responding to the protests.