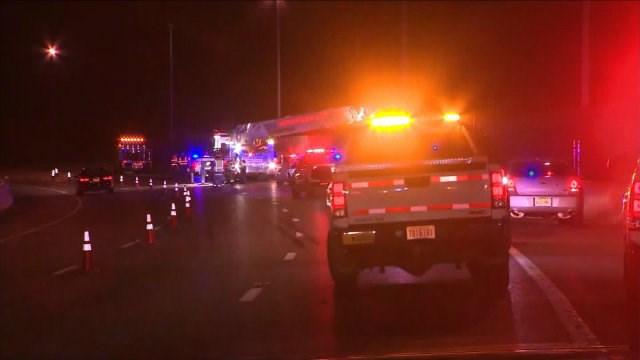 (CNN) -- Two toddlers survived a 100-foot fall after their father -- possibly holding them in his arms -- intentionally jumped off an interstate bridge over a river in northern New Jersey, state police said.

The father died in the fall from the Interstate 287 overpass near the Wanaque River, authorities said.

"When the officers found the children conscious and alert, it was nothing short of a miracle, that's for sure," said Capt. Christopher DePuyt of the Pequannock Township Police Department at a news conference Tuesday.

Trees underneath the bridge near the river apparently cushioned their fall, he explained.

"I, like anybody that's hearing this story now or last night, if you hear the beginning of the story you're expecting the worst," DePuyt said.

The children are being treated for non-life-threatening injuries at a local hospital, and police are asking for any possible witnesses to come forward so they can determine whether the father threw the children off the bridge and then jumped, or if he was holding them when he jumped.

The drama began Monday night when police responded to a residence in Pequannock Township for a domestic dispute call, DePuyt explained.

The woman there told officers that she had argued with her husband and he threatened to harm the children. He had then taken off with their 1-year-old and 3-year-old boys in his car, the statement said.

Authorities tracked down the vehicle using the GPS signal on the man's phone, DePuyt said.

They found the car on the shoulder of Interstate 287 on a bridge. Police then found the two children, injured but conscious, in a wooded area beneath the bridge.

The father, found in the same location, was pronounced dead at the scene, police said.