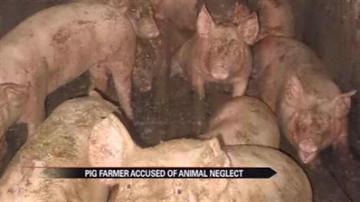 ST. JOSEPH COUNTY, Ind. -- Three years ago, a St. Joseph County pig farmer was cited by the Humane Society for neglecting his animals after dozens of dead pigs were found in his barn. To date there have been no charges filed against the farmer.

In 2010, the Humane Society took photos at the Madison Street farm after hearing complaints of animal cruelty.

"You always say, 'It can't be that bad.' But when we got there, it was worse," said Dr. Carol Ecker of the Humane Society of St. Joseph County.

They found dozens of malnourished pigs, in crowded conditions, covered in fecal matter.

Some had been dead so long they were just bones.

Dennis Wooden says it's cases like this that give hog farmers a bad reputation.

Wooden has been raising and judging hogs for years as the former president of the Michigan Pork Producers Association.

He says this case just doesn't make any sense.

He's thankful future farmers are learning the right way to care for animals.

Still, he and others say the best way to prevent animal abuse is by using common sense.

"If we don't know, we can't do anything about it. People need to call us whenever they find something like that," said Ecker.

We tried to reach the farmer several times, but our calls have not been answered.

It is unclear whether he is still raising pigs.