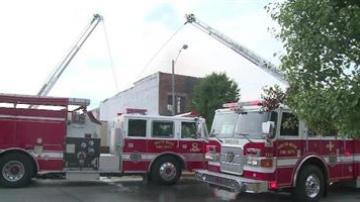 SOUTH BEND, Ind.-- Firefighters battled flames for over an hour at a business on South Michigan Avenue Saturday night.

With the death of Assistant Fire Chief Jamie Middlebrook still fresh on everybody’s minds, safety was a big concern.

Officials say no one was injured in the fire.

Assistant Fire Chief John Corthier said firefighters found heavy fire coming out of the building when they got to the scene.

"Firefighters initially went inside the building but after a few minutes realized the fire was too severe and then backed out immediately and went defensive," said Corthier.

Corthier descried the flames as powerful. He said once crews discovered holes in the roof, they knew they had to get out of the building.

"It’s the way we fight fires when we realize a fire is so severe we back out immediately," said Corthier.

Officials say 1919 South Michigan is supposed to be vacant, but some people who live in the area, say the building may have been used as a makeshift shelter for homeless people.

"Code enforcement had a hearing and it was a vacate and seal so the building was deemed inhabitable," explained Assistant Chief Corthier.

He said fire crews did not find anyone in the building when they got to the scene, but they have been called to the address several times.

"Our companies have had numerous calls to this building for various reasons, emergency medical runs, trash can fires, and other runs, this is a building we’ve been to before," said Corthier.

Firefighters are still working to find out what caused the fire.