No real pattern to recent shootings in South Bend 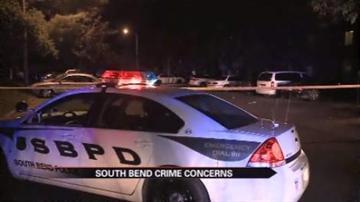 SOUTH BEND, Ind. -- The latest string of violent crimes in South Bend left two dead and two injured in four separate shootings. We spoke with police to see if there is a pattern to the incidents.

Police said the only thing these crimes have in common is that they seem to all be personal.

"It's kind of scary, it's kind of close to home. The only thing I can say is stay in the house," said Anastasia Whaley.

It's been less than a week since gunshots rang out down the street from whaley's home but she considers that area outside of her immediate neighborhood.

The shooting was one of four shootings in the past week. That has many residents on edge.

Police have their work cut out for them.

"The thing about these crimes is that the predictability just isn't there. You don't know if somebody's going to incite this violence based on a feud they have with somebody or whether it's over a debt or whether it's a he said she said type of thing. It's tough to predict," said Pat Hechlinski, South Bend Police Department Crime Prevention Unit.

To combat the unpredictable nature of these crimes, police have stepped up their presence in high crime areas.

"The nice thing is that we have our regular patrol guys out there but two months ago we received our HUD grant which enables us to put guys out walking and on bicycles throughout some of those areas that see a lot of activity," said Hechlinski.

Residents like Whaley say the extra patrols seem to help.

"Yeah there's a lot of police coverage over here so I think that's why we don't see crime over here. So that's good," said Whaley.

Police say despite what it seems like, the violent crime numbers so far for this summer are about average or even a little below.