No signs of alcohol in teens killed in OH car crash 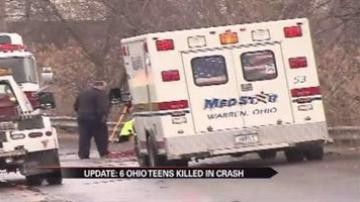 WARREN, Ohio — Toxicology reports show that none of the six teenagers killed in a car crash last month had drugs or alcohol in their system.

The teens were inside of an SUV that flipped into a pond. The ages of those killed ranged from 14 to 19 years old.

Two teens inside of the vehicle survived.

None of them were wearing seat belts.