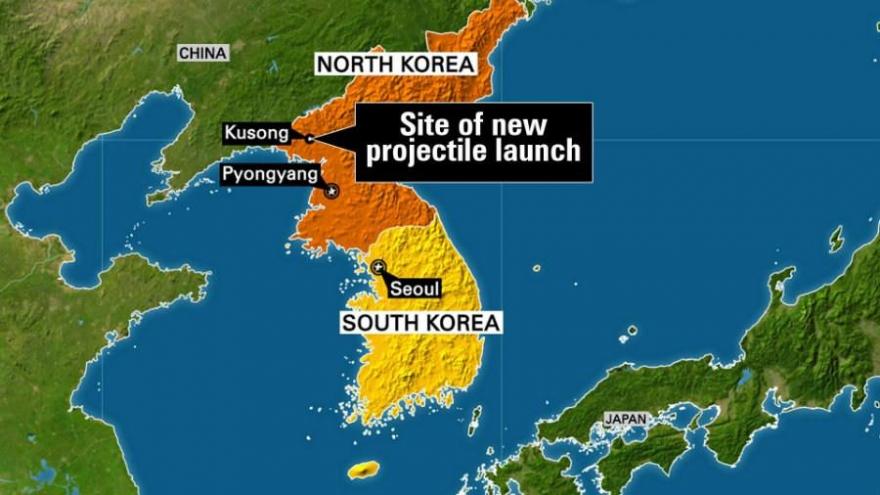 As Chinese President Xi Jinping prepared to inaugurate the Belt and Road Forum, Pyongyang fired a ballistic missile from a base in the country's northwest, near the border with China.

The forum is China's answer to Davos or the G20, centered around the colossal One Belt, One Road (OBOR) trade initiative.

OBOR is a personal project of Xi's, who spoke of the importance of "harmonious co-existence" with other countries during the opening ceremony. But that harmony was somewhat spoiled by North Korea's missile launch from a base near the Chinese border hours before Xi started speaking.

While analysts were careful of reading too much into the political timing of the missile launch -- pointing to technical considerations and favorable weather conditions -- they were clear the move would not be well received in Beijing.

"China will be greatly displeased," said Tong Zhao, an analyst with the Carnegie-Tsinghua Center for Global Policy.

He pointed to worsening relations between Beijing and Pyongyang as the US has increased pressure on China to act to reign in North Korea's nuclear program.

This month, North Korean state media warned China was crossing a "red line" in relations between the two countries as Beijing danced "to the tune of the US."

Zhao said that while Pyongyang may not have timed the launch to insult China, that it went ahead with it regardless showed they were unconcerned by potentially angering Beijing.

Also likely to be displeased was Russian President Vladimir Putin, who spoke at the forum shortly after Xi Jinping. According to a US official, Sunday's missile landed 60 miles (95 kilometers) south of Russia's Vladivostok region, home to the Russian Pacific Fleet.

It's unclear why North Korea would fire a missile so close to Russia. Euan Graham, an expert on North Korea at Australia's Lowy Institute, said it seemed to be a self defeating move by North Korean leader Kim Jong Un.

"Russia has until now shown no signs of wanting to get on board with tougher sanctions," Graham said.

In a statement, White House spokesman Sean Spicer said the move should "serve as a call for all nations to implement far stronger sanctions against North Korea."

Kremlin spokesman Dmitry Peskov said Sunday that Putin was concerned by the launch and the "escalation of tensions" in the region, according to state news agency TASS.

North Korea has conducted seven previous launches since the beginning of the year, though the most recent -- on April 29 -- was a failure, according to South Korean and US officials.

Pyongyang has been rapidly advancing its missile program, with a stated goal of achieving a functioning intercontinental ballistic missile (ICBM) that could threaten the US mainland.

While Sunday's missile was far from that, Tsinghua's Zhao said it appeared to use a lofted trajectory indicating a potential range greater than previously tested weapons.

"North Korea wants to attain a credible regional nuclear capability with which it can hold regional targets under nuclear threat," he said.

He doubted whether Pyongyang would ever be able to build a functioning ICBM "because the US is putting real pressure on not only North Korea but all other countries."

Graham said details about Sunday's missile "point to a new threshold of capability potentially crossed," adding that engineers "may well be able to draw warhead re-entry data from that which is applicable to their ICBM ambitions."

China is North Korea's chief ally and is seen by many as the main means for applying greater pressure on Pyongyang regarding its weapons programs.

Chinese media have become increasingly critical of North Korea in recent months, with state-sanctioned tabloid Global Times even questioning the relevance of the friendship treaty between the two countries.

"North Korea's pursuit of nuclear technology has impaired its own security as well as the region's, and it has also jeopardized China's national security," the paper said in an editorial this month.

Speaking on the sidelines of the Belt and Road Forum Sunday, Guan Jianxing, 22, a native of Dandong on the border with North Korea, said she was "very anxious about the situation."

"I don't know what North Korea is thinking of, they're so crazy," she said, adding that the forum was a "chance for China to get more control of this kind of international affairs."

Fellow volunteer Zhang Xiaohua, 21, said the forum came at a time when "less and less countries are willing to show leadership, especially the US."

Salesman Lian Jie said it was "so obvious that (North Korea is) targeting our country" with the missile launch.

"They are telling us they don't support OBOR and sabotaging our relationships with other countries," he said.