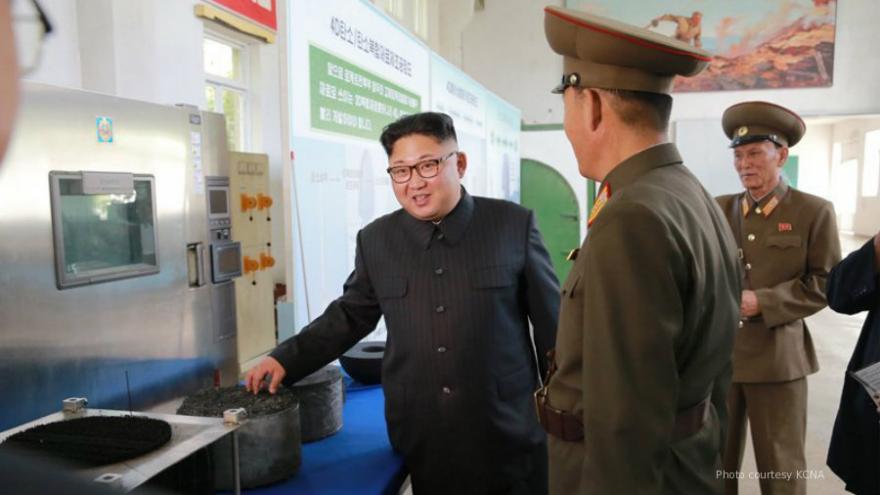 (CNN) -- North Korea launched a barrage of missiles Saturday, less than one week after US Secretary of State Rex Tillerson praised the country for showing 'restraint' in its weapons program.

Pyongyang fired three short-range ballistic missiles from the Kangwon province, the US Pacific Command said. The launches occurred in the midst of the US and South Korea's annual military exercises.

US Pacific Command, in its initial assessment of the launch on Saturday, said North Korea's first and third missiles failed in flight. It later amended its statement to say the missiles flew "approximately 250 kilometers in a northeastern direction."

The second missile appeared to have blown up almost immediately at launch, the command said.

"We will continue to work with our interagency partners on a more detailed assessment of this latest launch and we will provide a public update if warranted," command spokesman Cmdr. David Benham said in a statement.

Though North Korea says it now has the ability to send missiles to the US mainland, US defense officials said these short-range missiles did not pose a threat to North America or Guam.

"Although the launches were no threat to Guam, it reminds us that we cannot be complacent," said George Charfauros, the homeland security adviser on the US territory. "We place confidence in our US Department of Defense capabilities and continue open communications with our federal and military partners."

View from inside the country

The missile test capped yet another eventful week on the Korean peninsula, which began with the annual US-South Korea military exercises.

Both South Korea and the US say the training is defensive in nature, but North Korea sees it as provocative and hostile.

A day before the exercises began Monday, Pyongyang warned the US was risking an "uncontrollable phase of a nuclear war."

North Korean state-run media said the country's military could strike the US at any time and that neither Guam, Hawaii nor the US mainland could avoid the "merciless strike."

Ordinarily, North Korea doesn't grant CNN access inside the country when the drills take place. But this time, CNN's Will Ripley is the only western journalist there during this tense time.

"Despite the recent tensions, despite the missile launches, tourism continues here," Ripley said.

There were eight Americans on board Ripley's flight to Pyongyang. The US ban on American citizens traveling to North Korea takes effect September 1.

"This is the most tense I've ever seen [it]," a North Korean official told Ripley. "The situation could escalate at any moment."

Just last week, Tillerson attempted to dial down tensions by noting there had been no missile tests or "provocative acts" from North Korea since a United Nations Security Council resolution sanctioning Pyongyang was passed earlier this month.

Tillerson called North Korea's "restraint" pleasing and said it could open a pathway for dialogue in the near future.

Analysts said the photos were a sign from North Korea to the world, to show their solid fuel missile program is improving at a steady rate.

Solid fuel missiles are faster and easier to deploy, and harder to catch before they launch because there's a lot less to be done in terms of launch preparation. All US and Russian ballistic missiles are solid-fuel models.

A series of tests

Throughout the year, North Korea has conducted a series of ballistic missile tests.

It has fired more than 20 missiles since February, further perfecting its technology with each launch. In July, it launched an intercontinental ballistic missile, which North Korea claims could reach "anywhere in the world."

Earlier this month, President Donald Trump issued an extraordinary ultimatum to North Korea, warning Pyongyang not to make any more threats against the US or it will "face fire and fury like the world has never seen."

Tillerson quickly tried to allay fears of a military confrontation, saying there was no sign the threat level from North Korea had changed and that Americans should "sleep well at night."

In a conciliatory move before that, Tillerson said the US was willing to sit down for talks with North Korea, but only if it relinquishes its pursuit of nuclear weapons.