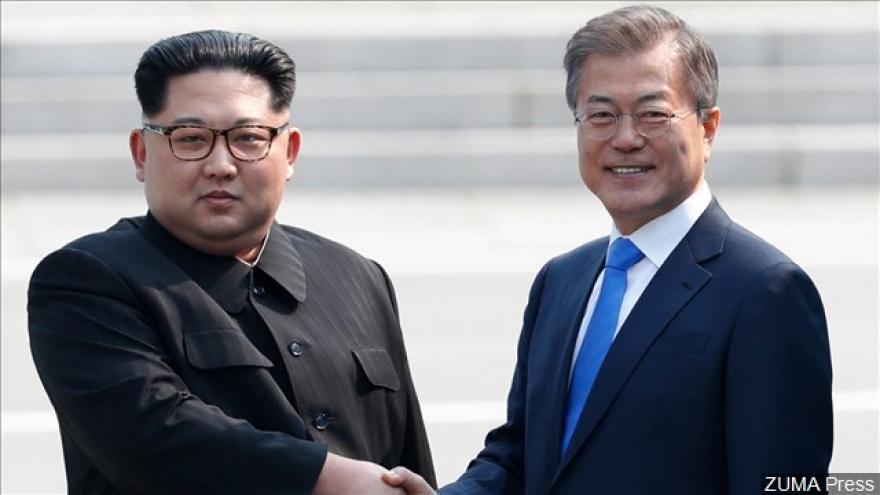 South Korean presidential spokesman Yoon Young-chan said Moon will reveal the outcome of his surprise meeting with Kim on Sunday. The presidential Blue House did not immediately provide more details.

The meeting at a border truce village came hours after South Korea expressed relief over revived talks for a summit between Trump and Kim following a whirlwind 24 hours that saw Trump cancel the highly anticipated meeting before saying it's potentially back on. Trump later tweeted that the summit, if it does happen, will likely take place on June 12 in Singapore as originally planned.

In their first summit in April, Kim and Moon announced vague aspirations for a nuclear-free Korean Peninsula and permanent peace, which Seoul has tried to sell as a meaningful breakthrough to set up the summit with Trump.

But relations between the rival Koreas chilled in recent weeks, with North Korea canceling a high-level meeting with Seoul over South Korea's participation in regular military exercises with the United States and insisting that it will not return to talks unless its grievances are resolved.

South Korea, which brokered the talks between Washington and Pyongyang, was caught off guard by Trump's abrupt cancellation of the summit in which he cited hostility in recent North Korean comments. Moon said Trump's decision left him "perplexed" and was "very regrettable." He urged Washington and Pyongyang to resolve their differences through "more direct and closer dialogue between their leaders."

Trump's back-and-forth over his summit plans with Kim has exposed the fragility of Seoul as an intermediary. It fanned fears in South Korea that the country may lose its voice between a rival intent on driving a wedge between Washington and Seoul and an American president who thinks less of the traditional alliance with Seoul than his predecessors.

Trump's decision to pull out of the summit with Kim came just days after he hosted Moon in a White House meeting where he openly cast doubts on the Singapore meeting but offered no support for continued inter-Korean progress, essentially ignoring the North's recent attempts to coerce the South.

In his letter to Kim, Trump objected specifically to a statement from senior North Korean diplomat Choe Son Hui. She referred to Vice President Mike Pence as a "political dummy" for his earlier comments on North Korea and said it was up to the Americans whether they would "meet us at a meeting room or encounter us at nuclear-to-nuclear showdown."

North Korea issued an unusually restrained and diplomatic response to Trump, saying it's still willing to sit for talks with the United States "at any time, (in) any format."

"The first meeting would not solve all, but solving even one at a time in a phased way would make the relations get better rather than making them get worse," North Korean Vice Foreign Minister Kim Kye Gwan said in a statement carried by Pyongyang's official Korean Central News Agency, which mainly targets external audience.

Notably, the statement did not appear in Saturday's edition of Rodong Sinmun, the official mouthpiece of the North's ruling party that's widely read by North Koreans.

The newspaper instead focused on Kim Jong Un's visit to the coastal town of Wonsan to inspect the construction of a beachfront tourist complex. Kim ordered the complex to be finished by April 15 next year to mark the birthday of his late grandfather and North Korea founder Kim Il Sung. Kim Jong Un's comments published by the newspaper did not include any mention of his potential meeting with Trump.

Analysts say Kim's diplomatic outreach in recent months after a flurry of nuclear and missile tests in 2017 indicates he is eager for sanctions relief to build his economy and the international legitimacy the summit with Trump would provide. But there's also skepticism whether Kim will ever agree to fully relinquish his nuclear arsenal, which he likely sees as his only guarantee of survival.

Comments in North Korea's state media indicate Kim sees any meeting with Trump as an arms control negotiation between nuclear states, rather than a process to surrender his nukes. The North has said it will refuse to participate in talks where it would be unilaterally pressured to give up its nukes.