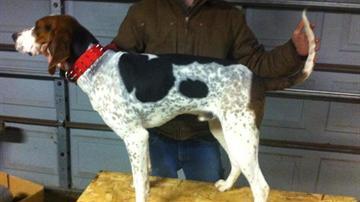 NORTH LIBERTY, Ind. -- "It's very shocking, especially living out here, everybody knows everybody."

Lindsay Hahn is still trying to make sense of it all. Friday afternoon, she went outside to check on her dogs, but when she only found one, she knew something was wrong.

Her fiance's dog, Lenny, a trained coon-hound, was killed and left outside her property.

"I've never shot anybody's pet. Why would you?," Hahn asked.

Unfortunately, it's a question that's being asked a lot lately.

"There's been quite a few dog shootings," Sarah Luthringer, an animal control officer, said. "It happens more often than you think."

She gets her fair share of distress calls, but said, it's something you never really get used to.

"It's still shocking that someone would shoot somebody's dog," Luthringer said. "Especially when they know it's a pet. It has a collar on; they know it belongs to somebody."

Right now, she's working the case, trying to catch whoever is responsible.

Chances are though, they won't be caught, leaving folks like Lindsay troubled and heartbroken.

"If your dog gets loose, you get a phone call or they bring it back to you; people just don't shoot other people's dogs," Hahn said. "And then to bring it back, and then dump it at the end of your driveway, to me, that's just spiteful."