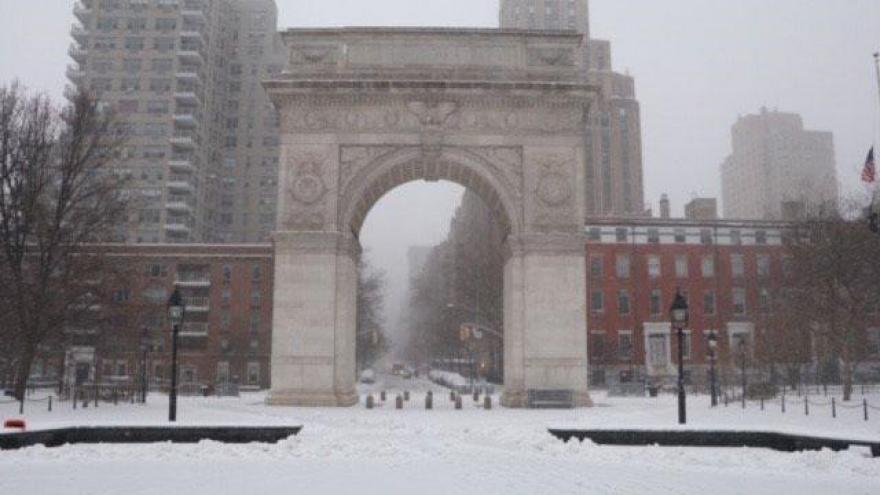 (CNN) -- New York City and Philadelphia have been spared the worst of a nor'easter, but the storm is walloping other parts of the region with heavy snow and high winds -- with nearly 15 million people still in the path of blizzard conditions.

The storm has wrought chaos on travel and daily life, with more than 8,400 US flights Monday through Wednesday canceled and thousands of schools closed. Connecticut banned highway travel Tuesday, and some major regional rail traffic was suspended.

A blizzard warning -- cautioning that high winds will combine with snow for poor visibility -- was in effect midday Tuesday for parts of Pennsylvania, New Jersey, upstate New York and the six New England states.

And winter storm warnings and watches have been hoisted over a region stretching from Ohio and West Virginia into Maine.

Local and state authorities warned residents to be prepared and to avoid unnecessary travel as winds in some coastal areas could hit 50 mph to 60 mph, reducing visibility to zero.

In New York City and Philadelphia, blizzard warnings were canceled Tuesday morning as more sleet or freezing rain fell than expected. The precipitation and wind still had its effects on travel: the New York City area's three major airports saw most of their flights canceled.

About 4 inches of snow had fallen at New York's Central Park by 8 a.m. ET. Snow mixed with sleet or rain was expected Tuesday afternoon, with wind gusts as strong as 49 mph possible. Authorities warned of possible coastal flooding along parts of New York City and Long Island.

School districts in New York City and Philadelphia were closed Tuesday, along with many government offices.

Philadelphia could expect freezing rain, sleet and snow Tuesday afternoon; up to 4 inches of snow and sleet are possible into Wednesday.

Wind gusts as strong as 39 mph could blow across the city Tuesday.

Inland Pennsylvania had the heaviest snow by mid-morning Tuesday, with more than a foot reported in Harrisburg.

Commuter buses in the area canceled service in advance of the storm. Dr. Marie Keith, a physician who works in New York and lives in the Scranton area, boarded the last bus Monday night leaving for New York City.

"There may be sick kids I need to see in my office tomorrow so I thought I should be there," she told CNN affiliate WNEP of her trip.

The storm also was kicking up strong winds in central Delaware, where gusts of up to 65 mph were possible.

The Boston area could get as much as 12 inches of snow and sleet; snow is due to fall into the late afternoon, followed by rain and sleet. A snow emergency was declared in the city Tuesday morning, meaning vehicles will be towed if they are parked on roads that are marked as snow emergency arteries.

In Connecticut, a statewide ban on highway travel went into effect Tuesday at 5 a.m. ET. The Hartford area could get up to 17 inches of snow and sleet, the weather service said.

"Wherever you are at sunrise Tuesday morning, expect to remain there throughout the remainder of the storm and into (Tuesday) night," Connecticut Gov. Dannel Malloy said, adding there were exceptions for certain professionals such as first responders.

Minor to moderate coastal flooding in Connecticut is possible around high tide on Tuesday afternoon, the weather service said.

In parts of Vermont, southern New Hampshire and southern Maine, more than 20 inches of snow are possible through Tuesday night, according to the weather service.

Airlines canceled more than 6,700 US flights scheduled for Tuesday and Wednesday, according to Flightaware.com. That came on top of 1,658 flights canceled Monday.

Warnings to use caution came from public officials up and down the East Coast -- including the President.

"Everyone along the east coast be safe and listen to local officials as a major winter storm approaches," President Donald Trump tweeted.

Federal agencies in the Washington area opened three hours late Tuesday; employees had the option of taking unscheduled leave or teleworking, according to the US Office of Personnel Management.

One man, 76, was operating a snow blower before he died; the second man, 64, was shoveling snow, investigator Jenni Penn said. Both were cardiac-related deaths, Penn said.