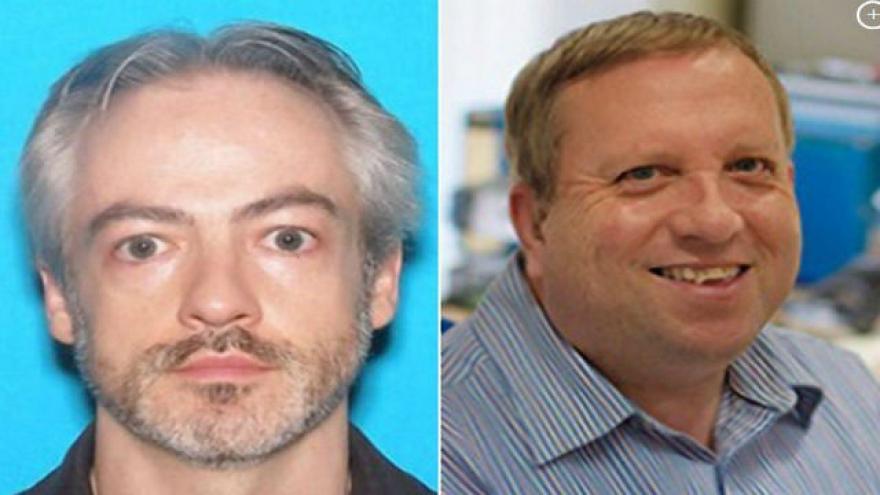 (CNN) -- When officers arrived to a Northwestern University professor's apartment, they found a man who had been stabbed several times, a high-ranking Chicago police official told CNN.

"The victim was savagely murdered," the official said. Frankly, he was "mutilated," he told CNN.

Police found the unresponsive victim, Trenton Cornell-Duranleau, a 26-year-old cosmetologist from the Chicago area, on July 27. Police also recovered what they believed to be a murder weapon -- a broken blade, the official said.

Cornell-Duranleau's death has triggered a national manhunt for two men who work for prestigious universities.

They are suspected of stabbing Cornell-Duranleau inside Lathem's apartment in the River North neighborhood of Chicago, police said.

Police said they could not elaborate on any possible relationship between the victim and the two suspects. According to CNN affiliate WLS, investigators determined that Warren had recently come to Chicago from England, but didn't know whether he knew the victim.

Police said on Thursday they believe the two suspects have fled the state.

"We do have an idea of their whereabouts and efforts to locate them are only intensifying from here on in," said Chicago Police in an email to CNN. "Our primary focus is to facilitate a safe surrender."

Federal agencies have been assisting in the search. A national alert was sent to police departments across the country advising that the two have arrest warrants for murder in Chicago. Lathem's passport and Warren's travel visa have been restricted.

Chicago Police spokesman Anthony Guglielmi tweeted a plea for the two to turn themselves in.

"Our search will only intensify," he said. "Prof. Lath(e)m & Mr. Warren, do the right thing & turn yourself in to any police dept."

Lathem's apartment is in an upscale, high-rise called the Grand Plaza Apartments.

"There's shock, there's no doubt about it. You know, this place is very safe," Grand Plaza Apartments resident Richard Aili told CNN affiliate WLS-TV. "I've been here 14 years and I've never heard of problems such as that."

Northwestern said in a statement that Lathem "has been placed on administrative leave and banned from entering the Northwestern University campuses."

"This is now a criminal matter under investigation by the appropriate authorities, and Northwestern University is cooperating in that investigation," according to the statement.

Lathem joined the Northwestern faculty in 2007 and researched bacteria that cause disease in humans, particularly lung infections, according to his university biography page, which has since been removed.

Alice Prochaska, principal of the Somerville College at Oxford University, where Warren is employed, told CNN, "We have been in contact with the police in the UK and are ready to help the US investigating authorities in any way they need."

"Andrew Warren's colleagues at Somerville College have now all been informed and we are all shocked to learn of the case," she added.