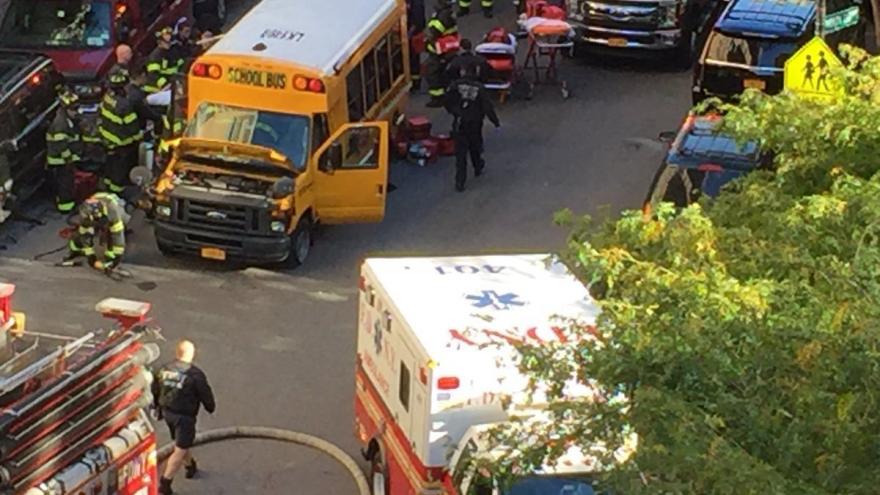 Authorities found a note in the truck Sayfullo Saipov allegedly used in the New York terror attack claiming he did it in the name of ISIS, a senior law enforcement official told CNN. The note was in English, the source said.

The driver of a rental truck drove down a busy bicycle path in New York near the World Trade Center, killing eight people and injuring about a dozen others in what officials said was an "act of terror."

After crashing the truck into a school bus, the suspect exited the vehicle while displaying imitation firearms and was shot in the abdomen by a police officer, according to the NYPD.

He was identified by two law enforcement sources familiar with the investigation as Sayfullo Habibullaevic Saipov. The suspect is from the central Asian nation of Uzbekistan and came to the United States in 2010, sources told CNN.

• The suspect is out of surgery, a law enforcement source told CNN. Before going into surgery, law enforcement was able to talk to him, the source said. It is not known if he told them anything.

• A Tampa, Florida, address is connected to the suspect. Investigators are also looking into a possible connection to New Jersey, the sources said.

• The man rented the truck in New Jersey on Tuesday, a person briefed on the investigation told CNN.

• President Donald Trump tweeted that the incident "looks like another attack by a very sick and deranged person." In a later tweet, he wrote, "My thoughts, condolences and prayers to the victims and families of the New York City terrorist attack. God and your country are with you!"

• New York Gov. Andrew Cuomo directed One World Trade Center to be lit in red, white and blue in honor of freedom and democracy, his office said.

Live updates on the attack

Authorities think it is an act of terror because the driver said something moments after leaving the truck and the method of the attack were consistent with other terrorist attacks, New York Police Commissioner James P. O'Neill said. Vehicles have been used as weapons in a number of terrorist attacks in recent years, including in deadly incidents in Nice, France, and London.

The suspect, driving in a Home Depot rental truck, hopped a curb at West Houston Street and drove south on the bike path on the west side of West Side Highway in Lower Manhattan for several blocks, officials said. A pellet gun and a paintball gun were recovered from the scene, officials said.

Six people were declared dead at the scene and two were pronounced dead at the hospital. At lease 11 others were transported to the hospital with serious but non-life-threatening injuries, according to New York Fire Commissioner Daniel Nigro.

Authorities are sure to look at whether the suspect visited Uzbekistan since he moved to the United States seven years ago, CNN terrorism analyst Paul Cruickshank said.

"There has been a significant problem with jihadism in Uzbekistan," he said.

According to Cruickshank there are two large jihadi groups in the country. One of them is the Islamic Movement of Uzbekistan, which is affiliated with ISIS.

In April, an Uzbek man was arrested after a truck attack killed four people in Stockholm.