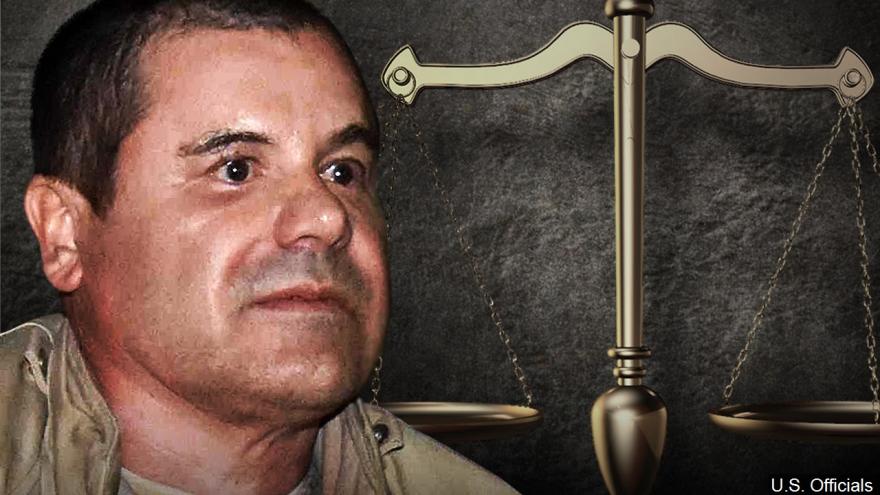 Guzman listened to a drumbeat of guilty verdicts on drug and conspiracy charges that could put the 61-year-old escape artist behind bars for decades in a maximum-security U.S. prison selected to thwart another one of the breakouts that made him a folk hero in his native country.

A jury whose members' identities were kept secret reached a verdict after deliberating six days in the expansive case, sorting through what authorities called an "avalanche" of evidence gathered since the late 1980s that Guzman and his murderous Sinaloa drug cartel made billions in profits by smuggling tons of cocaine, heroin, meth and marijuana into the U.S.

As the judge read the verdict, Guzman stared at the jury without expression. When the jurors were discharged, he leaned back in his chair to catch the eye of his wife, who gave him a subtle thumbs-up.

U.S. District Judge Brian Cogan lauded the jury's meticulous attention to detail and the "remarkable" approach it took toward deliberations. Cogan said it made him "very proud to be an American."

Evidence showed drugs poured into the U.S. through secret tunnels or hidden in tanker trucks, concealed in the undercarriage of passenger cars and packed in rail cars passing through legitimate points of entry — suggesting that a border wall wouldn't be much of a worry.

The prosecution's case against Guzman, a roughly 5½-foot figure whose nickname translates to "Shorty," included the testimony of several turncoats and other witnesses. Among them were Guzman's former Sinaloa lieutenants, a computer encryption expert and a Colombian cocaine supplier who underwent extreme plastic surgery to disguise his appearance.

One Sinaloa insider described Mexican workers getting contact highs while packing cocaine into thousands of jalapeno cans — shipments that totaled 25 to 30 tons of cocaine worth $500 million each year. Another testified how Guzman sometimes acted as his own sicario, or hitman, punishing a Sinaloan who dared to work for another cartel by kidnapping him, beating and shooting him and having his men bury the victim while he was still alive, gasping for air.

The defense case lasted just half an hour. Guzman's lawyers did not deny his crimes as much as argue he was a fall guy for government witnesses who were more evil than he was.

U.S. Attorney Richard Donoghue called the conviction "a victory for the American people who suffered so much" while the defendant poured poison over the borders. He expected Guzman to get life without parole.

"It is a sentence from which there is no escape and no return," Donoghue told a news conference outside the courthouse, through snow and sleet.

Lichtman said the defense "fought like complete savages" and will appeal the case. "No matter who the defendant is, you still have to fight to the death."

He said his client was a positive thinker who "doesn't give up."

Upon hearing the verdict, Guzman was "as cool as a cucumber," Lichtman added. "Honest to god, we were more upset than he was."

Deliberations were complicated by the trial's vast scope. Jurors were tasked with making 53 decisions about whether prosecutors have proven different elements of the case.

The trial cast a harsh glare on the corruption that allowed the cartel to flourish. Colombian trafficker Alex Cifuentes caused a stir by testifying that former Mexican President Enrique Peña Nieto took a $100 million bribe from Guzman. Peña Nieto denied it, but the allegation fit a theme: politicians, army commanders, police and prosecutors, all on the take.

The tension at times was cut by some of the trial's sideshows, such as the sight of Guzman and his wife, Emma Coronel Aispuro, showing up in matching burgundy velvet blazers in a gesture of solidarity. Another day, a Chapo-size actor who played the kingpin in the TV series "Narcos: Mexico" came to watch, telling reporters that seeing the defendant flash him a smile was "surreal."

While the trial was dominated by Guzman's persona as a near-mythical outlaw who carried a diamond-encrusted handgun and stayed one step ahead of the law, the jury never heard from Guzman himself, except when he told the judge he wouldn't testify.

But his sing-songy voice filled the courtroom, thanks to recordings of intercepted phone calls. "Amigo!" he said to a cartel distributor in Chicago. "Here at your service."

One of the trial's most memorable tales came from girlfriend Lucero Guadalupe Sanchez Lopez, who testified she was in bed in a safe house with an on-the-run Guzman in 2014 when Mexican marines started breaking down his door. She said Guzman led her to a trap door beneath a bathtub that opened up to a tunnel that allowed them to escape.

Asked what he was wearing, she replied: "He was naked. He took off running. He left us behind."

The defendant had previously escaped from jail by hiding in a laundry bin in 2001. He then got an escort from crooked police officers into Mexico City before retreating to one of his many mountainside hideaways. In 2014, he pulled off another jail break, escaping through a mile-long lighted tunnel on a motorcycle on rails.

Even when Guzman was recaptured in 2016 before his extradition to the United States, he was plotting another escape, prosecutor Andrea Goldbarg said in closing arguments.

"Why? Because he is guilty and he never wanted to be in a position where he would have to answer for his crimes," she told the jury. "He wanted to avoid sitting right there. In front of you."