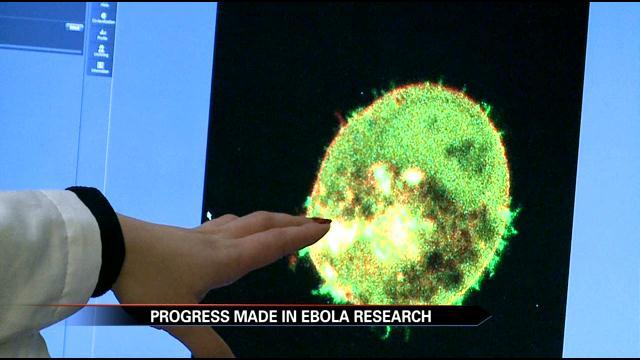 Two months ago, after ABC 57 News first took you inside a research lab at the Indiana University School of Medicine-South Bend, scientists have made more strides in ridding the world of Ebola.

Just days ago, the University of Notre Dame, in partnership with the Indiana School of Medicine-South Bend, officially published a scientific study that could help us better understand a contagious virus that has claimed the lives of thousands.

“Around here we don't look back for very long we get results and its really cool. We keep moving forward and discovering new things. I look at the one piece of Ebola that helps the viruses escape,” Notre Dame Ph.D. student Katie DelVecchio said.

Del Vecchio is a Ph.D. student at Notre Dame. She's been hard at work over the past several months.

“We want to see if we can get this protein,” Del Vecchio said.

Like her colleagues and classmates, she spends her days in this lab, working with Ebola-like proteins.

“We want to be able to visualize that protein linking up to escape out of the cell,” Del Vecchio said.

Researchers at IUSM-South Bend are using simple and small tools to observe how Ebola proteins interact with human cell components to better understand how this deadly virus spreads.

“In order for a virus to sustain the infection and make someone sick and start to show symptoms the virus has to replicate and infect different cells in the human body,” Stahelin said.

This new information that shows how this lethal virus targets its victims could open a new door in how we treat Ebola.

“We want to design drugs to stop replication specifically how the virus acquires its new shape and particle,” Stahelin said.

And they are drugs that could potentially save tens of thousands of lives.

“We think this will be useful not only to stop replication inside the human but also to prevent the spread from one human to another,” Stahelin said.

According to the Center for Disease Control, to date, there have been more than 6,000 deaths in West Africa from Ebola. Here in the U.S. there have been four confirmed cases, one of those cases deadly.