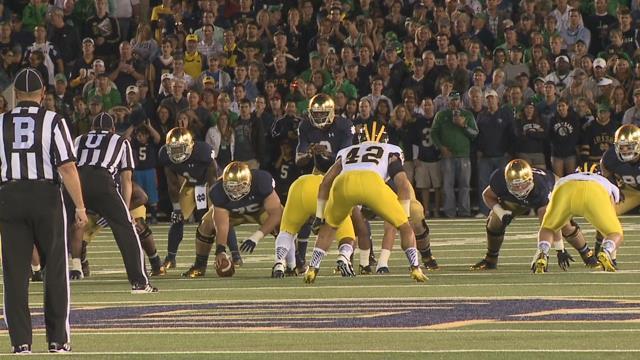 The University of Notre Dame announced Thursday the long-awaited return of a match-up that will have many Fighting Irish and Wolverine fans excited.

Notre Dame Football will once again face off against their rivals to the north; the University of Michigan.

Fans on both sides of the border are eager to face off yet again.

The two universities have agreed to a two-year series with the first game taking place September 1, 2018 at Notre Dame Stadium and the second on October 26, 2019 at Michigan Stadium in Ann Arbor.

According to a statement from Notre Dame vice president and James E. Rohr Director of Athletics Jack Swarbrick, making these games happen was no easy task.

“Shortly after Warde Manuel was hired as Michigan’s athletic director, he and I began working to make this renewal of the series possible. That we could get games on the schedule as soon as ’18 and ’19 required a lot of work by our staffs and some great cooperation by the Big Ten, ACC and other schools that were on our future schedules," said Swarbrick.

"I’m excited to see Notre Dame and Michigan, two brand-name programs, get back together on the football field,” said Kelly. “Both programs have a long and storied history of success. We’re talking about the two winningest programs in all of college football. We’ve wanted to make this happen for quite some time. We wouldn’t be able to make today’s announcement without the work from Jack (Swarbrick) and other members of our administration. This is a win for everyone involved, not just those at either institution, but both fan bases and fans across the entire college football landscape.”

Even with the passion they have for their home teams, many fans agree with Kelly.

“I like the rivalry between the two teams. It’s just a lot of fun to watch,” said University of Michigan fan Dave Skalski.

Whether you’re rooting for the Irish or the Wolverines, there seems to be a general consensus about the matchup.

“It’s just straight fire between the two teams when they play each other,” said O’Leary.