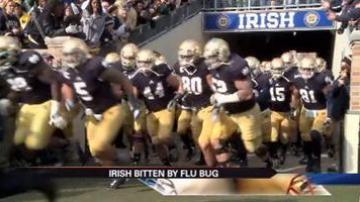 NOTRE DAME, Ind. – The Notre Dame Football Team batted the flu for a few weeks, but were prepared to take on Boston College Saturday.

Two key players have came down with the illness.

George Atkinson III didn’t travel to Oklahoma for the 30-13 win over the Sooners.

Head Coach Brian Kelly said nose guard Louis Nix wasn’t feeling well leading up to Pitt and they didn’t plan to use him unless it was an emergency.

"I was on the sideline, I didn't think I was going to play and I didn't feel, I was fatigued, I was coughing," said Nix.

Nose guard Kona Schwenke hurt his shoulder in the game against Pitt, so Nix was ready to help.

"I had to do something and step up and I gave it the best I could and I guess that was enough," said Nix.

Now Nix and the rest of the team are feeling better and looking forward to their next battle against Boston College.