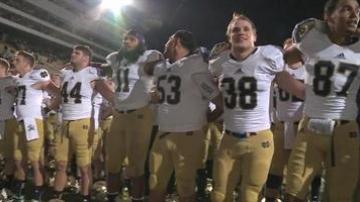 "It's a real good win for our football team," said Irish head coach Brian Kelly after the game.

Purdue came out strong against their in-state rival.

Quarterback Rob Henry connected with Akeem Hunt for the first points of the night 9:08 in the first quarter.

In the second quarter Paul Griggs added a 47 yard field goal for the Boilermakers.

Notre Dame managed to get on the board just seconds before the half with a field goal.

It was a physical game on the gridiron. McDaniel even got a set of stitches at the half.

“You saw how hard he ran," said Kelly. "He had to come out after one drive. He got four stitches at halftime went back in and really was a huge part about we did tonight," added Kelly.

In the third quarter the Irish seemed to get it together.

“I knew I needed to settle down and just start making some plays to help the team win, that’s exactly what we did as an offense," said Irish quarterback Tommy Rees.

The Irish answered with the DaVaris Daniels fourth quarter showdown.

Daniels grabbed a 9 yard pass in the end zone and tied the game 17-17.

“That’s the kind of player he can be," said Rees, "I think he’s shown how successful and good of a player and I'm really excited for his future."

Minutes later Rees threw a beautiful 82 yard pass to Daniels, where he held off the defender.

Irish pulled ahead for first time 24-17.

"The run after the catch was just phenomenal. He's that kind of player," said Kelly.

Notre Dame capped off the night with an interception from cornerback Bennet Jackson. Jackson ran it into the house for the touchdown.