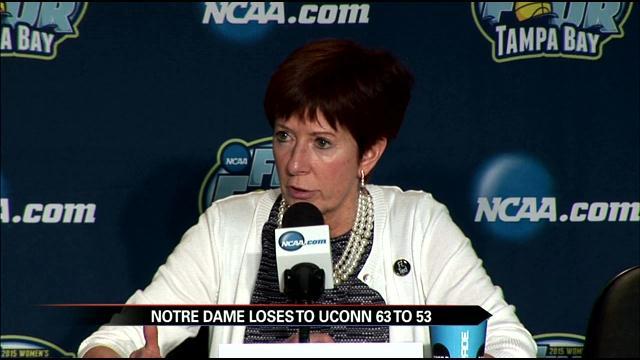 The Notre Dame Women's Basketball team gave it all they had, but ended up with a case of deja vu in this year's NCAA National Championship game.

The Fighting Irish fell to the Huskies in the title game for the second year in a row. This time Connecticut won by a score of 63-53.

This was Notre Dame's fourth time in the championship game in the last five years. They've come up short in each of the last four title games.

The Fighting Irish kept it close in the first half, but fell behind 31-23 at the break.

Notre Dame's defense was playing well, but the team was having a difficult time getting their shots to fall.

ND's star player Jewell Loyd had a good first half, putting up 12 points. The second half was not as good for Loyd, who missed all eight of her shots.

Briana Turner put up 14 points and 10 rebounds for the Irish.

"We felt at halftime that we were guarding them in the half court offense pretty well and our problem was in transition and second chance points. We held them to 63 points which is probably a season low for them. Our problem was on offense, we couldn't score," said Head Coach Muffet McGraw.

The Fighting Irish end the season with a record of 36-3.