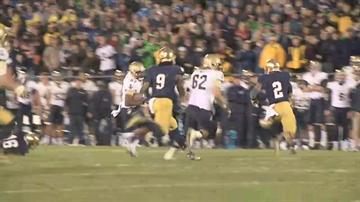 SOUTH BEND, Ind.-- The Irish tallied their fourth straight win Saturday night at Notre Dame Stadium, beating the Navy Midshipmen 38-34. The key for the Irish was stopping Navy on their last drive.

Irish Head Coach Brian Kelly has said Navy runs the triple option better than anyone else and Saturday, he wanted to shut it down.

"It's just one of those deals where they're difficult to defend. We just scored more points than they did today and we got a win and I'm happy about that," Kelly said.

Although the goal coming into the matchup was stopping Navy's option, the Irish struggled with that, allowing five touchdowns for a total of 34 points.

"It was a goal to go out there and try and stop those guys and they run a great option offense and it was very challenging, but when we needed a stop, we were able to come through," Irish linebacker Jaylon Smith said.

But thanks to a fast start and consistent play on the offense, Notre Dame outscored Navy and stopped them on the last drive.

"When you play a team like that you need to get out to an early lead and try to take them out of their game plan. If not, you're going to have a nail-biter like that because they do a good job of offensively staying on the field, eliminating your touches, but I'm really proud of the whole team and how we were able to come back to find a way to pull a close one out," Irish quarterback Tommy Rees said.

The Irish move to 7-2 on the season and head to Heinz Field in Pittsburgh next Saturday to take on the Pitt Panthers.