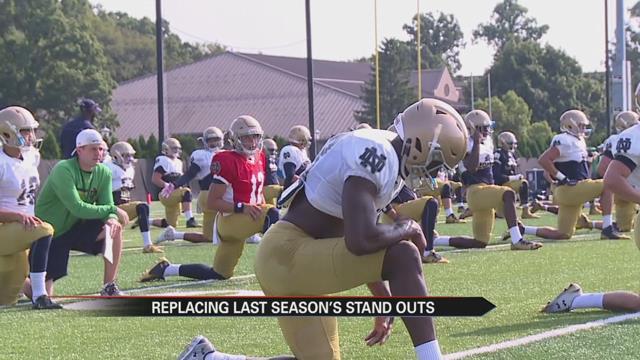 The pride, the pageantry - Football is back in South Bend. And a big question looming over the Irish this season is who will be the starting quarterback.

Brian Kelly dropping a bomb shell Wednesday. Both Malik Zaire and DeShone Kizer will play in the first game of the season at Texas.

Coach Kelly says that Malik and DeShone are two of the top 5 playmakers on the team, making the decision difficult. Malik was the man at the top of the depth chart to start 2015. But after getting injured in that Virginia game, he had to sit out the rest of the year.

"I swear I'm coach Kelly's favorite QB the way these challenge keep coming up," said Malik Zaire. "But I think every great QB has a story that's similar to going through adversity so I'm going to always continue to do the things I need to go."

"Obviously we are both going to continue to compete and see where the season takes us," said Deshone Kizer. "But as of now what has been told to us is that we are both going to be on the field. So we are going to have to somehow figure out how to buy into that and try to win a big game."

Coaches say they will use a plug and play approach this season. A lot of it will be about who is getting hot at the right time.

On offense, Coach Kelly says they will play the hot hand. Tarean Folston and Josh Adams will be your primary two runningbacks. Dexter Williams will also get looks. All three have different running styles, something Coach Kelly loves.

On defense, Nyles Morgan looking to start at MLB in Jaylon Smith's shoes. Coach Kelly is very impressed with his physicality.

In the secondary, coaches and players say to expect improvement and depth.  Especially with a new leader emerging in redshirt freshmen, Shaun Crawford.

"Now he's progressing into one of our top defensive backs," said Todd Lyght, defensive backs coach. "I think Shaun Crawford is the guy. And I think Nick Coleman is coming on. Drue Tranquil and Cole Luke have done an outstanding job this offseason helping out our young players."