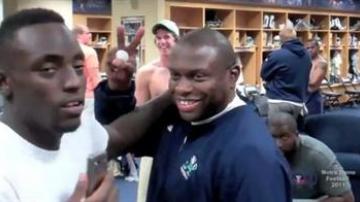 NOTRE DAME, Ind. -- The Notre Dame football players are banking on Trick Shot Mondays for a win against USC this Saturday.

Coach Tony Alford took this week's honorary first shot.  The players insisted that "the game is easy and that a child could do it."   The coach's game was a little off with three missed throws; but the players forged ahead, and thanked him for making a special guest appearance.

This week's special trick shot involved one player throwing the ping pong ball against the wall, bouncing it backwards, off of a table, over an overturned trashcan and blown into a cup by Inside Linebacker Justin Utupo.

Once the ball went in the cup, the players rushed each other, jumped up and down, cheered, and kicked over the cup in their classic style of celebration.

One of the video's viewers on YouTube said that blowing the ball in seems like cheating, but according to the rules of trick shooting, it still counts because no hands were used to assist landing the ball in the cup.  Will the controversial trick shot help them to secure a win against USC?  Only time will tell when both teams take the field on Saturday.