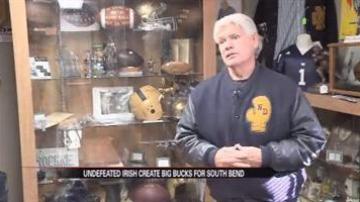 SOUTH BEND, Ind. -- It's no secret that Notre Dame Football means big money for the city of South Bend. With the team’s success this season, has it translated into bigger profits?

According to a study by Forbes Magazine, home football seasons usually bring in about $10 million in profits. In South Bend, where football history is a part of city history, a successful season means successful business.

"You know, Leahey and Ara and Lou Holtz and now we add the name Brian Kelly. All he needs is a national championship and we're following history,” said Jim Augustine, owner of Augie’s Locker Room.

Augie sells Notre Dame history. With a record setting season in the works, business is booming.

"I'm starting to see people get more excited, and starting to spend a little more on certain items that you wouldn't be able to get in say a bookstore,” said Augie.

Items like leather helmets from the golden years of Frank Leahy and trinkets signed by Kevin McDougal-- the quarterback of the last Irish team to be 10 and 0.

"We've all been some way connected to this university and that makes it more special when there is success,” said Augie.

For Augie, this season's success was unexpected-- but now that fans and businesses have had a taste of the former glory, Augie says the future is looking brighter.

“I think fans are in awe and in shock that this is really happening. So it's already being talked about for next year and we haven't seen that in a long time,” said Augie.

With the last home game of the season looming this weekend, the Irish have the opportunity to go undefeated at home for the first time since 1998.