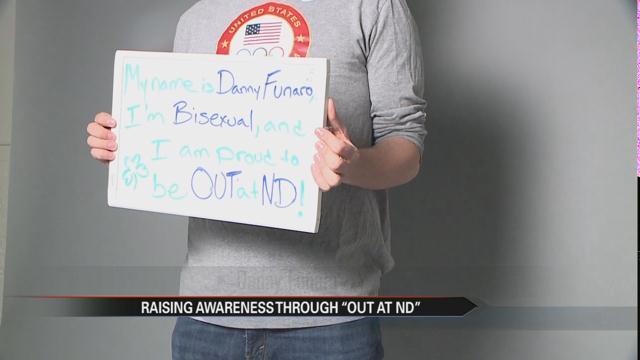 Many who are part of the LGBTQ community say being at a Catholic university has its challenges, and organizations like “Out at ND” are providing a type of safe haven for LGBTQ students.

Danny Funaro is participating in the “Out at ND” movement, an organic effort to bring more awareness of the LGBTQ community on Notre Dame's campus.

Funaro says he's relieved to know there is a place he can be accepted.

"When you are at a Catholic school you are dealt with some people who don't approve or don't understand because they have not been exposed to bisexual people," said Funaro.

He is not the only one who feels this way, Jake Bebar who helped start “Out at ND," wanted to provide an organization for students who are part of the LGBTQ  community to come together in a positive light.

"Being a gay student at a Catholic university is definitely a unique experience," said Funaro.

Tuesday, the group launched their campaign through photographs.

"I think people don't respond as well to being told how to feel I think when they see that there are a lot of other people who are allies members of this community they will be more accepting of it," said Ramani.

Funaro and students with “Out at ND” hope their efforts will be an example for other universities across the country.

"I think it would be lovely to spread to other universities, especially other Catholic universities where a movement like this could be important."

“Out at ND” is hoping the organization will make Notre Dame a more LGBTQ friendly university.