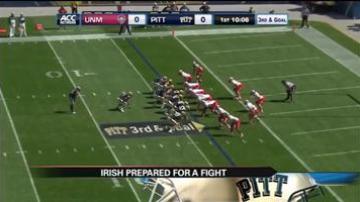 SOUTH BEND, Ind. --- Saturday's match up is the 69th time the Panthers and the Irish have gone head to head.

The Irish lead the series, both at home and on the road with 47 wins to Pittsburgh's 20.

The teams have tied once.

Before the Panthers moved their home games to Heinz Field, they played their last game at "Pitt Stadium" against Notre Dame in 2004.

But despite the series lead, last year's nail biter is proof that the Panthers have what it takes to pull off a win at home Saturday night.

The Irish also know what to expect.

"Pitt's going to have every threat because when we play them, they're going to play to the best of their abilities. We have to play with discipline and we'll have to go out there and play our fundamental assignments and everybody has to play their key role," Irish Defensive Lineman Stephon Tuitt said.

In Pittsburgh, their quarterback is anticipating a consistent defense they hope to break through.

"I think they're just very disciplined. They don't make too many mistakes. So we have to find our shots and take advantage of them," Panther Quarterback Tom Savage said.

So far the Irish have only given up 182 points on defense this year.