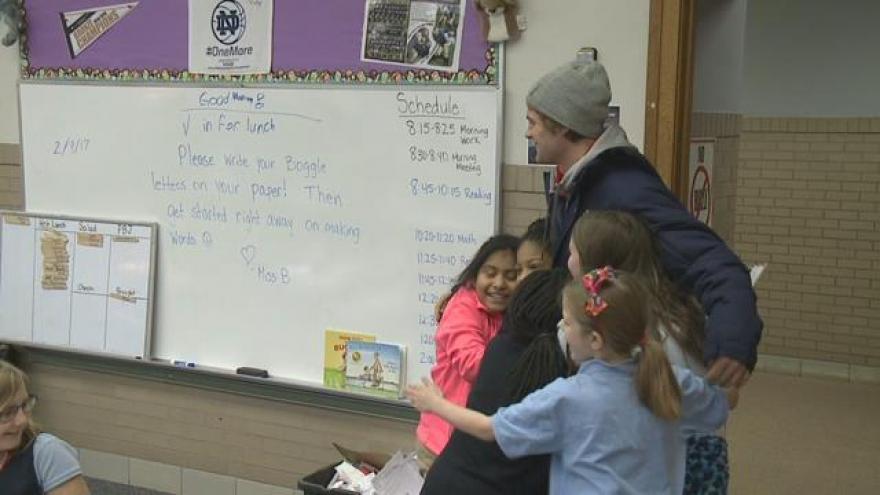 Anders Bjork has the potential to leave Notre Dame as one of the greatest players in hockey program history.

But his legacy won't be just what he's done between the boards. Starting in 2015, Anders began volunteering at Perley Fine Arts Academy to fill service hours for a class. He needed just 20 hours, but knew there was plenty more that needed to be done.

"It's a special place and hearing about it just makes you want to go there. I just had a big impact on me and I couldn't really stop going back," Bjork said.

In the classroom, he's known as Mr. B, and each time he comes, he's treated like a star, and not because of what he does on the ice.

"It wasn't a big deal that I played hockey because they just felt that  I was their friend who's older," Bjork said.

The respect he's given is visible the moment he steps in Courtney Baraney's third grade class. His words carrying lots of power, even when he's not there.

"If they are bothered by things or other or something that has happened, I'll always here another child say, 'Well what would Mr. B say? What would he do?'" Baraney said.

His presence, Baraney says, makes going to school for these kids that much more enjoyable.

"I tell him everytime he leaves, you just reset the whole classroom, so I can have 15 out of 20 kids doing the wrong thing and the minute Anders walks in the room, that all disappears," Baraney said.

And it works the same way for Mr. B.

"I could be having a terrible week like Monday through Friday and then I'll go there for 45 minutes on Friday and just totally have new perspective," Bjork said.

"I'll walk into the classroom and they'll give me a look like, 'You didn't score this weekend What's going on?'" Bjork said.

It's a bond that can't be broken, no matter how far away.

"I don't think any miles can get between Mr. B and his kids," Baraney said.

As Bjork continues to affect these kids lives everyday.

"They're definitely there for me no matter what, no matter how I play or what's going on in my life they've been there for me, and I've just tried to return the favor," Baraney said. "There are 50 million public school children in the United States, and of those 50 million, and more than half need an Anders, we were just lucky enough to get one," Baraney said.

"They're definitely there for me no matter what, no matter how I play or what's going on in my life they've been there for me, and I've just tried to return the favor," Bjork said.