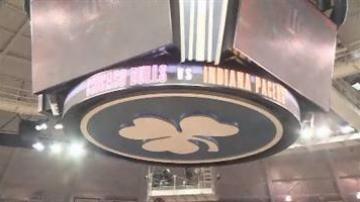 NOTRE DAME, Ind. -- For the first time in over a decade, the University of Notre Dame hosted an exhibition game between the the Chicago Bulls and Indiana Pacers.

These tickets were hard to come by. Many of fans say they jumped at the opportunity to see their favorite NBA teams play because they were right here in town.

Fans filled the stands to watch two division rivals square off, but it had one father-son duo at odds.

Justin Stouder wanted to spend some quality time with his dad, a die-hard Chicago Bulls fan, "We've got a little rivalry going on."

So, at the last minute, he decided to grab tickets so his dad could see the Bulls as they wrap up their preseason.

"I am not the best planner all the time, so I paid for it a little bit, paid a little extra, but it was worth it!"

Despite the rivalry, these two were happy to get the chance to see their teams battle it out.

"I am really excited! I haven't seen the Bulls play in 10 years or so," said his father Merril Stouder.

It was Hansbrough's first time back to Purcell Pavilion since joining the Indiana Pacers.

"That is pretty cool though, really. I didn't know that because I don't follow the Pacers, just the Bulls," admitted Merril.

No matter who these fans are rooting for, they were just glad to have front row seats to all the action.

"Of course all the seats in the house are great, but yea I lucked out," said Merril.

The Bulls won 97- 70, but the Pacers will have another shot at a victory when both teams hit the court for their first regular season game December 4th.