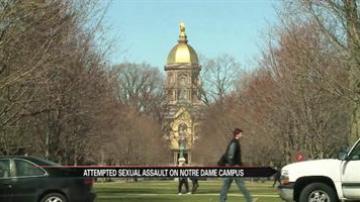 NOTRE DAME, Ind. -- The University of Notre Dame is investigating a sexual battery on campus that happened on Tuesday morning just outside the LaFortune Student Center just before 5 a.m.

According to the student, a man grabbed her and said something to her. She broke away and ran to safety.

The university is not commenting on the incident.

Student Amy Rizzo said she felt a little nervous after hearing about the sexual battery.

"It's a little scary. A little concerning and definitely unfortunate," said Rizzo.

"People should always be aware of their surroundings. Try not to be alone. Unfortunately it's dangerous to walk alone at night, especially if you are a female," said Hurt.

"I definitely don't like walking around by myself late at night, so I will try to be with people," said Pinkelman.

The suspect is described as a Hispanic male possibly between 30 and 40 years of age, 5’10” – 6’ tall with a pot belly stomach, dark complexion and black loose curly hair just below the ear line. He had a beard but no mustache and a tattoo on his right upper arm that showed below his t-shirt sleeve. He spoke with a heavy Hispanic accent. The suspect was wearing a red t-shirt and dark pants.