Notre Dame looks to correct mistakes in loss to ASU 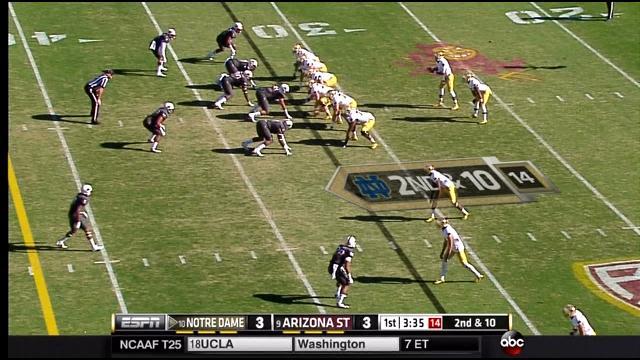 The Fighting Irish weren't able to keep their one-loss season alive this past weekend, falling to Arizona State Saturday. And now, they look to move on with a win over the Northwestern Wildcats this week.

There's no question Notre Dame's performance against Arizona State last Saturday was below average. And although quarterback Everett Golson was responsible for four interceptions and one fumble against the Sun Devils.

"He's responsible for all of the turnovers," Head Coach Brian Kelly said Tuesday.

Kelly is defending his starting Q-B this week.

“That's not to mean that he's to be blamed for all of the turnovers. There's ten other players on this football team,” Kelly said.

He's also holding other players accountable for the many mistakes in Saturday's 55-31 loss.

“We don't go around this program blaming people, that's not how we do business. We talk about personal accountability and everyone is accountable,” Kelly said.

Despite giving up more than 100 yards and 28 points to the Sun Devils, Kelly says his team proved their resolve.

“We didn't come back from 31 to whatever because the guys had an epiphany hey, if we don't score we're not going to the playoffs. They came back because they are competitors and they're winners,” Kelly said.

As the Irish look to correct last week's mistakes before they go head to head with Northwestern Saturday, a team that's coaxed their opponents into 16 turnovers this season, they also look to prove their will to win.

“Our focus is really about, what do we need to do to win this weekend because that's all they want to do, is they want to sing the fight song at the end of the day,” Kelly said.

Northwestern is unranked and 3-6 on the season. Kickoff is set for 3:30 Saturday afternoon.