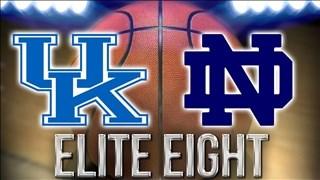 The Notre Dame Fighting Irish faced off against the Kentucky Wildcats in what would be a battle to the end Saturday night.

With a trip to the Final Four on the line, both teams came out strong throughout the entire game.

The first half showed many ND skeptics that the Irish could keep pace with the number one team in the nation, with the score all tied up at 31-31 at the break.

The end score, although not in favor of the Fighting Irish, told a similar story. Notre Dame fell to Kentucky 68-66, but that was a much closer margin than the 11 points that Kentucky was favored by according to Las Vegas betting odds.

Zach Auguste led the Irish with 20 points and nine rebounds.

Steve Vasuria added 16 points of his own, while Jerian Grant contributed 15.

Karl-Anthony Towns was unstoppable for the Wildcats, scoring 25 points.

Andrew Harrison would end up being the hero for Kentucky, with his final two free throws coming in the final six seconds of the game, giving the Wildcats the win.

The Notre Dame Men's Basketball team has much to be proud of this season. They are the first ND Men's team to make it to the Elite Eight since 1979, they won the ACC Championship, they made it much further into the NCAA Tournament than many people had predicted them to, and they kept pace with the top-ranked team in the nation.

Congratulations to the Notre Dame Men's Basketball team on an outstanding season.