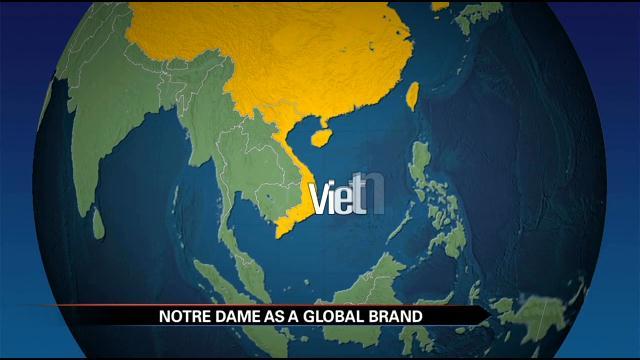 The University of Notre Dame is a name recognized across the globe and we learned the prestigious Catholic school is making a push to be known world wide both academically and athletically.

"The Notre Dame brand at this point fundamentally stands for excellence be that athletic be that  academic," said Nick Johnson, the Executive Director of Strategic Communications.

Whether that is here in America or any where around the world. During the fall the newest ambassadors for the Golden Dome are the golden helmets: the Fighting Irish football team who are winning over new fans every Saturday from Southeast Asia to South America.

A quick glance at the broadcasting schedule for the football team shows their games being broadcast in 24 countries every Saturday from Vietnam to Venezuela. Each game a chance for someone new to learn what Notre Dame stands for.

"If a football fan can be sitting in China, anywhere, please hop on the bandwagon we are happy to have you," said Johnson.

Johnson says given the programs history, it seemed like a natural progression.

In the 1920's Fighting Irish fans crossed the country for games. In 2012, 35,000 Americans flew to Dublin, Ireland for the team's first international match up with Navy.

"It was the largest migration of American sports fans to a different country to watch a sporting event of any kind in history," said Johnson.

So what's next?  They aren't ready to say but with a global reach of study abroad programs, research, and international professors the world is Notre Dame's oyster.