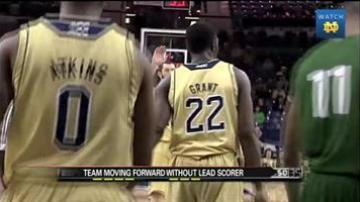 NOTRE DAME, Ind. -- The Notre Dame men’s basketball team is gearing up for their last non-conference game of the season. They will be without their leading scorer, Jerian Grant.

“Anytime you lose a player of that caliber it would be tough so we are going to have to get this game together quickly starting with Sunday and getting into ACC,” said Captain Eric Atkins.

Less than a week ago, senior guard Jerian Grant announced he was no longer enrolled in the school due to an academic issue.

The team re-grouped before heading into their last non-conference game this season on Sunday against the Golden Griffins.

“We are just focusing on the guys that are in the locker room right now, we can’t control everything else so we are just trying to get better every single day, and really compete,” says Atkins.

Moving forward, freshman Demetrius Jackson has taken a larger role on the team.