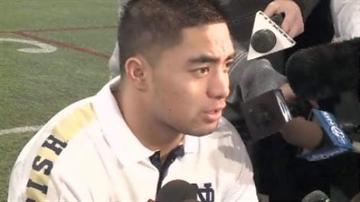 SOUTH BEND, Ind. –  For first time, Notre Dame’s coaches and players talked to the media about their upcoming match-up against the Crimson Tide. In addition to preparing for the game, players are taking part in several community service events this week.

"After our last game, our number one challenge was to prepare our team for this game and we didn’t' talk about the long layoff. We just talked about what we needed to do to win this football game,” said Notre Dame head coach Brian Kelly.

The Fighting Irish are back in action.

The coaching staff and top starters had an opportunity to talk for the first time about the next and final challenge of this football season.

The Irish are coming into the national championship game against Alabama ranked No. 1.

But the Crimson Tide is the 9-point favorite.

It’s a mentality the Irish have gotten used to this season.

"It doesn't matter who we go up against, we're always the underdogs. We're always on upset alert so it's nothing new to us,” said Manti Te’o, Irish linebacker.

Instead of looking at the big picture, Notre Dame is once against adopting their focused mentality, working first on their own development before tackling the tendencies of the Crimson Tide.

One of the issues under the microscope in the next few weeks will be the red zone offense. This season the Irish scored just 27 touchdowns of their 58 trips to the red zone.

"Again you can use the USC game as an example. There were a number of field goals that needed to be touchdowns. We're going to need to score touchdowns when we get in that area against Alabama,” said Kelly.

If there's one thing the Irish don't need to work on for this game, it's excitement.

"This is something that you might not ever get the chance to do again for the rest of your life, so I mean if you can’t really get up for that then  you've got issues,” said Kapron Lewis-Moore, Irish defensive end.