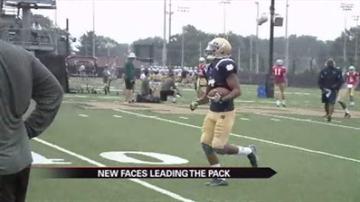 SOUTH BEND, Ind. -- Notre Dame's players are ready to get back on the field to show they're a new team, different from last year, but that they have the same goal - a successful season.

In nine days, the Fighting Irish will face Temple with a new starting quarterback who is very familiar.

Tommy Rees has played in 33 games for the Irish.

Rees says he has grown and improved.

There are new faces leading Notre Dame this year.

"Great representatives of not only our team but our school I'm very excited to be a part of that," said Martin.

And Martin, along with offensive guard Chris Watt made sure this off season that the younger lineman felt a part of their clan.

"Just thinking back to my freshman year at times we feel like we weren't included as much with the older group," said Watt.

They made sure all the lineman waited until everyone was out of classes to work out together and work towards-their one goal.

As fall camp comes to a close-and the Irish get ready to lace up for their first game, they are excited for another season of Notre Dame football.

"I'm confident and ready to play. We have  a whole other week and there's some things we need to clean up but I'm confident to get in the game and ready get it going," said Martin.