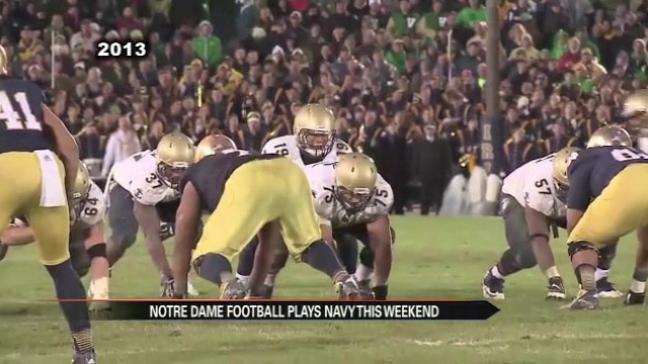 Refreshed and rested after a bye week, the Fighting Irish hope to rebound after a loss to Florida State, with a win over the Navy Midshipmen this Saturday. And Head Coach Brian Kelly says step one to a victory over Navy is successfully defending the triple option.

Saturday will be the first time Notre Dame will see the triple option this season.

“That option is very difficult to defend, and seeing that all year in terms of what they do offensively, coupled with the fact that they know their system and they executed it extremely, extremely well.” Kelly said.

And Kelly says he's not worried about Navy's cut blocks.

“As it relates to the cut blocks, stop being crybabies, and go play the game.  I don't want to hear about cut blocks.”

It's an offense that allows Navy to avoid incomplete passes by consistently running the ball down the field, running the clock down with each possession.

“Offensively they hold on to the football.” Kelly said.

Which means Notre Dame's offense could see less time on the field, and less opportunities to make those big plays.

“Defensively, Buddy Green does a very good job of forcing you to use up clock and take time to move the ball.” Kelly said.

And to get ready for the challenge of defending the option, Kelly's showing a little tough love.

“I told our guys this is a no cry zone this week. I don't want to hear about it.  Go play big games and go play the game the right way.” Kelly said.

Saturday will be the 88th straight year Notre Dame will face Navy. The Irish have won 47 of the last 50 meetings.