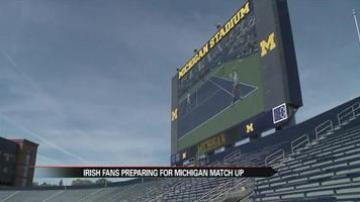 ANN ARBOR, Mich. -- Saturday night, Notre Dame takes on the Wolverines under the lights in the Big House. It's the game everyone is talking about and ABC57 is in Ann Arbor for the big game.

"We're going to have to play well. It's a very good football team. We know that. We can't go up there and turn the ball over like we did a couple years ago. We understand that. It's a well-coached football team on both sides of the ball and in special teams so we know the challenges ahead of us," said Irish Head Coach Brian Kelly.

It's a matchup that's become a big regional rivalry for the two teams-no matter whether it's home or away.

"When I played them last year, it was a great experience. It was a great game, so they're going to come out hard against us and play their best so we've got to go up there and play to the same potential as they do, and the rivalry itself is just amazing," said Irish Defensive End Stephon Tuitt.

Just two years ago, the Irish lost in the final minutes of a nail-biter at the Big House.

"If you're going to win at Michigan, and nobody's been able to do that now under Brady Hoke, at Michigan, you better go up there with an attitude to be aggressive and go play the game. You can't sit back and wait and hope. If you do, you're not going to win," said Kelly.

Coach Kelly has said throughout the week that he is confident his team will perform well under the pressure and all of the hype surrounding this big game.

While crews prepare the Big House, the campus is buzzing as fans prepare for the big game.

The day will begin with ESPN's College GameDay. Some fans are already waiting, saving their spot for the show.

"I figured I'd just pull up a chair, grab my books, got my buddy Nick hanging out with me and we're just passing the time.